Xiaomi's sub-brand Redmi made the highly anticipated K30 Pro (and its better-endowed sibling, the K30 Pro Zoom) official during an online event in China yesterday. The company chose the occassion to also brag about the sales of the K30 family's predecessor, and that is the K20 series, comprised of the Redmi K20 and Redmi K20 Pro.

In the nine months in which those two models were available to buy, more than 5 million units were sold. Interestingly, half of those went to people buying a Redmi branded smartphone for the first time. 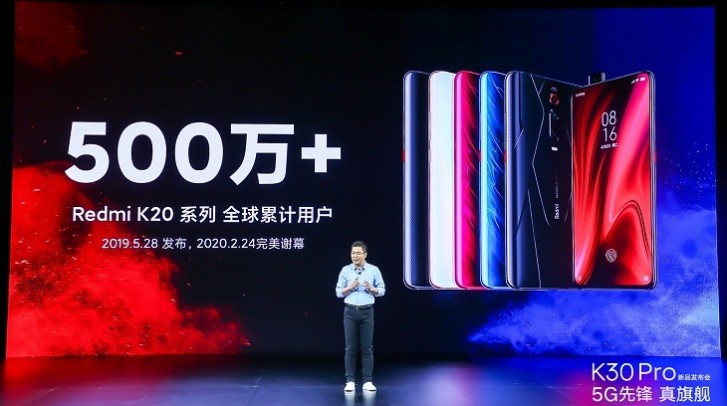 Furthermore, the company has already managed to sell more than one million Redmi K30 units in less than three months, the time elapsed since its release in China. This number is even more impressive when you consider that for the past couple of months China has been battling the COVID-19 pandemic. Apparently only 30% of the people who wanted to buy a Redmi K30 actually managed to, so there's still a lot of pent-up demand there.

1- K20 and K20 pro had Wide,Ultrawide and telephoto while the k30 and k30 pro only have useless depth sensor instead of a telephoto lens,While only The k30 pro Zoom has all 3 lens together as same as k20, k20 pro if u are a professional photographer ...

The phone offers a lot for your money, mine had a screen glitch, a yellow line appeared from top to bottom and there was no screen replacement in, wait 3 months and a replacement could not be found at the authorized technical service I only had it ...

i wonder where the 50% statistic come from