As we draw closer and closer to Xiaomi's February 25 unveiling event for the Redmi K40 series of devices, more and more official posters are popping-up online to serve as nifty little teasers. Yesterday we got a close-up look at the AI triple camera setup on the back of what we can only assume will be the Redmi K40 Pro. Today brings another official poster, this time revealing that the K40 family uses Samsung's new E4 material OLED panels. 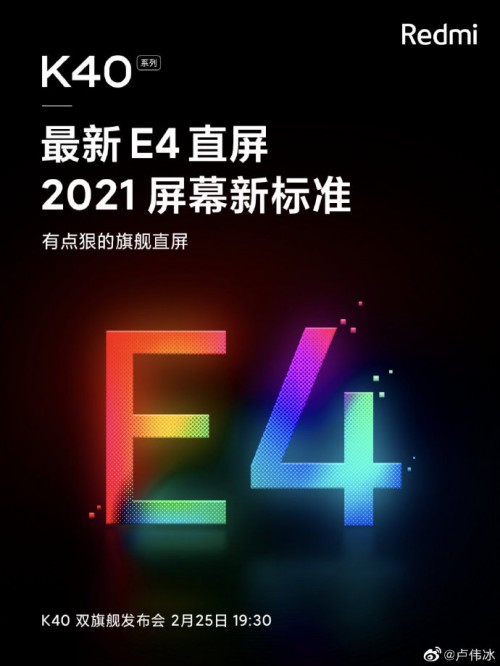 For those of you wondering exactly what this means, simply-put, E4 denotes a new generation of materials Samsung is using to craft these Organic Light-Emitting Diode displays. Materials that result in higher brightness levels, improved contrast and color accuracy, all while saving power in the process. Really in-depth technical details on the technology are admittedly a bit scarce, but we do know that the Xiaomi Mi 11 notably uses an E4 Samsung OLED panel, which was found to be all-round excellent by DisplayMate. The vivo X60 and X60 Pro are also using the technology and rumor has it, the Meizu 18 will be as well.

Another official banner confirmed that 120Hz refresh rate will also be a thing. 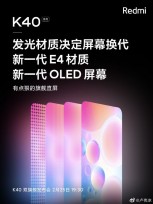 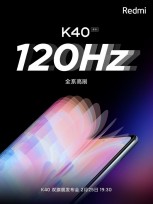 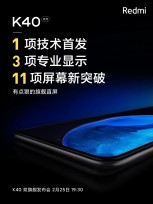 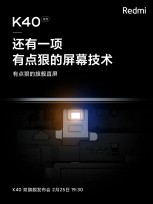 As far as we can tell from a recent TENAA certification listing, at least a couple of Redmi K40 models will feature flat OLED displays, presumably of this E4 variety, along with in-display fingerprint scanners and a single centered punch hole for a selfie cam. Though, it is worth noting that there is chatter of a possible third, lower-end model - the Redmi K40S, which could include some downgrades in this regard, compared to the K40 Pro and vanilla K40. 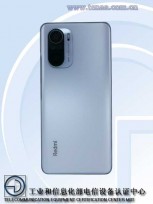 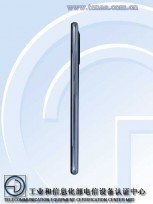 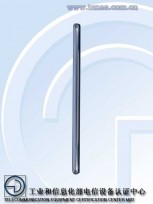 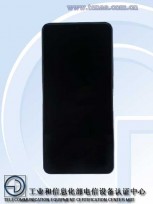 Yet another leak has also suggested that only the K40 Pro will be based on the flagship Snapdragon 888 chipset, while the regular K40 will have to settle for the Snapdragon 870. TENAA listings have also mentioned a 4,500 mAh battery and Android 11. And info on LPDDR5 RAM, UFS 3.1 storage, Wi-Fi 6 and 33W charging has all been tossed around. Though, again, we can't exactly be sure this applies to all models in the K40 family.

Regardless, with February 25 right around the corner and a steady stream of teaser banners coming-in, we should have all the information soon enough.

U made a big mistake. Open ur eyes widely and it properly 👀

I think u r unable to look the difference between "Mi" and only letter "M" Mi is smartphone series. While M is display series made by Samsung DISPLAY (not galaxy m series)