It's official: Redmi K40 will be unveiled on February 25

We've been hearing about the Redmi K40 for a long time now, and today the company VP Lu Weibing finally confirmed that K40 will be unveiled on February 25.

Machine translating Mr Lu's Weibo post from Chinese reveals the Redmi K40 will come with a brand new design, have a brand new positioning, and offer a brand new experience. 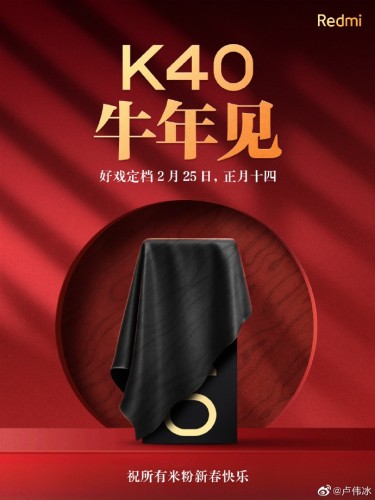 Redmi K40 is coming on February 25

The post didn't reveal the design of the Redmi K40 or detail its specs, but the exec previously confirmed that the K40 series will come with a Snapdragon 888 SoC, feature the most expensive flat screen, and pack a battery larger than 4,000 mAh. Lu Weibing also said that the starting price of the K40 lineup will be CNY2,999 ($465/€385).

With the unveiling still over two weeks away, you can expect to hear a lot more about the K40 lineup in the coming days from leaksters and company officials.

Question will there global set release?? as no more collaborate with poco...

I think you're just made chaos around. I manage supply chain costing and outsourcing of global chips and component for many handset brand and all of them been tested in lab before released to factory. If those chips 100% sourced from Japan / US,...