Last month Xiaomi released its list of devices which will receive MIUI 11. Back then, the Redmi Note 8 Pro was scheduled to get the firmware update in December, and now users in India are reporting that the stable beta build of MIUI 11 is already being seeded to their devices. Prior to that Chinese and Indonesian users also received the update.

The stable beta is a term used by Xiaomi to describe what other makers typically call Golden Master or Release candidate versions. It should have all the bugs fixed and unless new ones are found at the last minute, it will be more or less identical to the final release. 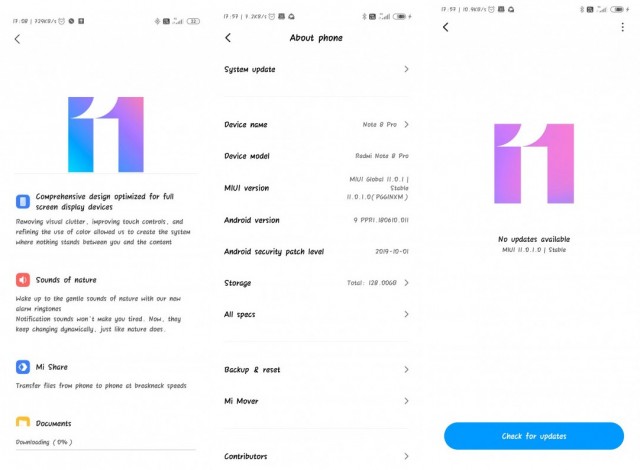 The new update comes with build number 11.0.1.0 and also brings the October security patch. It weighs in at 587MB but unfortunately is still based on Android 9, rather than Android 10.

Nevertheless, it brings all the new MIUI 11 features like improved gestures, documents preview and Mi Share alongside the new UI design elements and system sounds. The full stable MIUI 11 build is still expected to arrive in December.

The only touchscreen issue for me is the delete button on this MIUI 11, could be my typing mistakes. The community issue is there, but for ones that doesn't care about custom rom, MTK is good enough. Even my cousin Redmi Note 2 (MTK) working flawless...

I'm not surprised... Many devs are pro-Qualcomm...especially on XDA Russian's forum (4pda) is more active. It's sad, but many devs will refuse even to have a look when it's not Qualcomm...talking about GNU and law (without knowing the duty of e...

For a more stable advertisement experience.