Earlier this month Xiaomi sub-brand Redmi announced that it will launch its 64MP camera smartphone in Q4 this year. Now we know that it will be called the Redmi Note 8 Pro and will be unveiled on August 29.

Redmi shared a poster on Chinese social network Weibo giving us a glimpse of the Note 8 Pro that has three cameras aligned vertically on its back, with the fourth one placed on the right.

The image further reveals that the Note 8 Pro won't come with an in-display fingerprint reader as it's placed below the rear cameras. 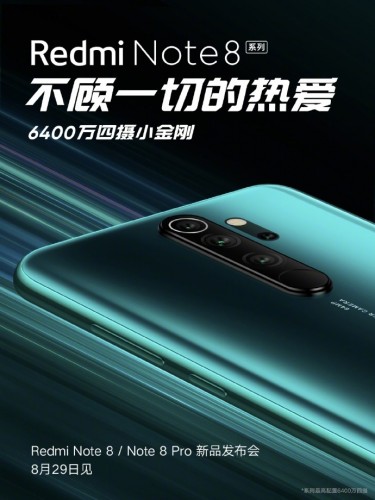 Redmi will also announce the Note 8 on August 29 alongside the Note 8 Pro, but it's unlikely to sport a 64MP camera.

More details about the Note 8 series should surface in the days leading to the official announcement on next Thursday.

If Samsung us giving away 64 MP and 108 MP away, what will be left for its camera in S11 next yr. Something new or sane sensors. Any idea

I hate MTK processors. In my experience, their work bad compared to Snapdragon.