The name “Redmi X” was first associated with what turned out to be the Redmi Note 7, but the real thing is coming on February 15 as revealed by a teaser poster (note that it doesn’t come from an official Xiaomi account).

Said poster hints that the X will become the first Redmi to feature an in-display fingerprint reader. This was a premium flagship feature just a year ago. 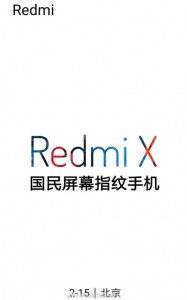 The Redmi X is expected to be more powerful than the Note 7, perhaps using as Snapdragon 710 instead of a 660. This could be the rumored Redmi Note 7 Pro, which is scheduled for a February announcement with a Snapdragon 675 chipset, plus a 48MP camera (using a Sony sensor instead of the Samsung one).

The Chinese Spring Festival starts on February 5 and ends on February 15, so that's a great time to launch a new product. The Redmi Note 5 and 5 Pro were announced on February 14 last year.

Lol Volkswagen have just bought other brands of cars. They didnt start to make them. All these names mentioned were at start in there own companies. Later got sold to VW. While with Xiaomi the redmi was part of Xiaomi and now will be as a new br...

hope they will make "at least one mode"l for people who like to use phone one-handed. that means body size not more than 140x70mm, with full-screen and long battery life with battery size at least 4000mAh and for me long battery life is more importan...