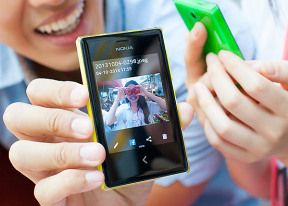 SERIOUSLY WTF NOKIA ??????
You can Buy Lenovo A850 Quad core 5.5 inch awesome phone with 90EU why spend on peace of crap nokia here ?
while lenovo is android 4.2.2
you can buy many cheap android phone with way way better spec and bigger screen at that price !!!
nokia go kill yourslf with your cheap phones

Can't even manage to stream video. Just edge and gprs, so lame.

D**n Nokia wat is it with U guys and huge bezels?!!

Its good that it has 3G and LED flash, butas with all budget phones it fails on 3G bands, its getting harder and harder to use phones without 850MHZ HSDPA here, and even 1900 is becoming a requirement many places. Sure the good old 900 and 2100 bands are still most important but still, after all there is no EDGE networks to fall back on in most of Asia and we all know how slow GPRS is, its not like in Finland and the rest of Scandinavia where EDGE is more like the highspeed connections here.

Anyway, the camera scared me away from this phone, it is specced like C3-01 T&T but produces inferior photos to it, and i had one of those as a secondary unit for a while but the cam was so bad that i gave the crap to a friend on her birthday, she sold it to her landlord to get money for drugs and that was the only time the phone proved useful. So beware, Asha 503 is very inferior to the already terrible C3-01, i can promise you will not be happy with that camera. Expect pics taken using flash to look like monochrome renders with banding to the unrecognizable, you will barely know your own face.

AnonD-226704, 22 Jan 2014is this thing smaller thae the sony ericson x10 mini and if so will this be the smallest smart... moreI actually wondered the same thing and checked the specs yesterday. Its bigger, significantly bigger! Even the Asha 500 is bigger, although it has a 2.4 Inch screen, while the X10 Mini has a 2.55 Inch screen. Go Figure!

Without a bigger screen (at least 3.5") and higher screen resolution (say 230 ppi), this phone does not stand a chance in the 'emerging markets' in spite of having a decent (and evolving) OS. There are hundreds of Chinese and Indian android phones flooding the market. $10-$15 plus or minus does not mean anything.

Hmm, this is quite good for Asha. But.. I still prefer the old symbian s60 phone. Dunno.
Maybe I'll buy this Asha for my Mom, but can't promise. There's still better phone out there on similar price range.

Well, look it has much less cons than iphones lol

This phone is outdated, hello its 2014! Even Nokia 500 have 360 x 640 px (3.20") 229 ppi in 2011 + 16 mln colours, Asha 503 have only 133 ppi and 256k colours! Where is Radio with RDS, VoIP over WLAN, Video-calling, WMA/WAV/RA/AAC/M4A support, where is good quality phones like E51, E72, N82 ?! Many people want good classic phones! Is so hard to make new version phones as mentioned above ? Great workmanship (indestructible E51), variety of a function, superb battery. Companies make low/high end touchscreen phones or very low classic, where is good old phones in the new version, but without castrated functions. Is so hard to make phone with 1800-2000 mAh battery, great build quality, camera like in ~ N8, with lots of features/options, multitasking, fast working ?!

Pricing is a problem here but this phone comes somewhere between feature phone and a smartphone.

is this thing smaller thae the sony ericson x10 mini and if so will this be the smallest smart phome?