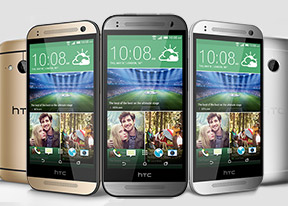 It is better designed than the original One Mini. But the size... it's even bigger than the LG G2 Mini, which already is quite a large phone for a "mini". I don't understand why HTC gives this phone a mini label, it's huge. My Lumia 1020 is even smaller than this "mini".
You can get an HTC One M7 for probably less than this with a slightly bigger screen, better resolution and it's the same size...

Not much different from moto g except camera and body, price it around $500 and we will wonder why htc finds no buyers.

Wow , this "mini" is about as big Galaxy S4 9505 , heavier too , lower specs , but higher price ?! Why is that HTC . This is the reason you are bankrupt ! We can buy the real strong mini z1 compact from Sony , and it`s better at all chapters ! The price is the same

I hate Android because of the on screen buttons. They suck bad.

Anonymous, 15 May 2014How is it that the HTC One M8, and Galaxy S5 were released and reviewed almost immediately, ye... moreExactly...

How is this a mini, looks like a phablet to me!!!

How is it that the HTC One M8, and Galaxy S5 were released and reviewed almost immediately, yet the Sony Xperia Z2 hasn't?

Only 1gb ram?Come on...Considering that ONE MINI is not really smooth,I supose the new Mini should also feel slopy...Only 4.4.2 or better optimisations should save the day for the newest Mini...Not to mention onscreen shity keys...Too bad

Also, no Infrared port at the top? That's really disappointing too.

The Z1 compact is the best small phone out there at the moment, I think only Samsung will come close but will fall short! Sony are awesome!

Looking at them side by side, I much prefer the old design. It looks much nicer. The extra rounded sides of the new one make the bezels look even bigger.

AnonD-60157, 15 May 2014The chipset went back a step with quad core A7 instead of the more powerful dual core Krait se... moreBecause this is HTC. It seems only Samsung is learning if the S5 mini delivers the snapdragon 800 as it is rumored.

The chipset went back a step with quad core A7 instead of the more powerful dual core Krait setup in the original. This will likely be priced above the Desire 816, which has a higher clockspeed and more RAM.

Another fail. The least HTC could have done is to include more RAM. This is just a primped up Moto G. Why the hell can't these useless OEMs emulate Sony?

Nothing here to get excited about. I refuse to buy any mobile with on screen keys, they're absolutely rubbish. And I'm expecting that this will have the same stupid LED notification in the speaker grill like with other HTC phones that is so tiny you can barely see it. Stick with Samsung.