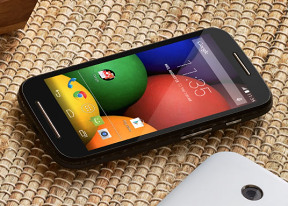 Google taking over Motorola , I thought Motorola phone quality could have improved....but such a waste..I bought Moto E 2 months back....it sheer waste of money ...gets hung...OS does nt work..and what not...decided in future will never go for MOTOROLA Phones...ever...:(((

When will motorolla starts lollipop 5.0 soak test on moto e..

I brought my moto E
5-6 months ago

They did sought out the problem
But now it again started

When I plug in the earphones
They work fine
But even it gets moved or pressed delicately in my pocket ...the problem starts
It's like I'm plugging and unplugging it rapidly
Music starts and stops again and again

I am using Motorola E I am not getting keypad on the screen. Only voice pad is there how to solve this

Mmm am using moto e since July.. Its a great set.. Never hangs.. Awesome touch... Well shaped grip... But the fact that its not having an auto focus and flash as well while taking some pics like that of some note is very hazy.. And its battery back up is also grt and doesn't really takes much time to get charged like that of micromax sets.. If u don't need it for camera I would say go for it.

Jordan, 25 Oct 2014Headphon jack problem I can not connect my Moto Head phone to my mobile. A very genuine issueI have the same problem.loose contact possibly!

Abhijan, 05 Nov 2014My phone's (Moto E) LCD broken from inside. From outside there is no issue. Not even a scratch... morei have a same problem with u bro..inside lcd suddenly broken without any accident..very dissapoint it

My moto e inside lcd suddenly broken..I see many people had same problem too..think again if u want to buy this phone..

Don't buy moto e. I bought moto e past 3 months ago but the mic got repaired two times till now & there is no proper response from customer care.

My phone's (Moto E) LCD broken from inside. From outside there is no issue. Not even a scratch on the gorilla glass. When I visited to service center (S.D Communication :: Kolkata) they told me I have to pay for this. But it's not my fault if LCD has been break from inside. It should be free of cost. Because it's under warranty.﻿

Anonymous, 12 Oct 2014I purchased Moto E 4 month back. 3 weeks back I don't know how it happened but its display got... moreThe same thing happened to me.....my moto e was 1 month old when I found its display broken when I took it to the authorized dealers of Motorola to get it repaired,they said they won't cover the warranty because the display was broken.so I asked them how much it cost to get it repaired and they said about 4,500 rupees including service charges there was no way for me to pay that amount because I bought the phone from flipkart @5400 rs on diwali sale.so I contacted Motorola customer care and asked the reason for such high service price and they no solid explanation to my question and they promised me that they will connect me to their Superior officers within an hour but they never did and at last I had pay rs 3,300 at a local phone shop to get it fixed.I'm deeply disappointed with Motorola services.

AnonD-267565, 21 Oct 2014Moto E is now long in tooth and has been overtaken by much superior phones, especially Xiaomi ... moreThere is problem in moto e . 3g preferred network in tatadocomo will disturb when u call . noise . disturbance after checking 5 to 6 moto e phones

Superior phone in its range. Camera is not only but we can call it the best even it has no flash light. Its too good.

Headphon jack problem I can not connect my Moto Head phone to my mobile. A very genuine issue

Moto E is now long in tooth and has been overtaken by much superior phones, especially Xiaomi Redmi 1S, with a bigger 4.7 inch, better, screen. Better processor and better 8 MP Cam with autofocus, and of course even better a INR 5999 price which is INR 1000 less than Moto E. No wonder Moto E sales have floundered. Unless a more competitive Moto E1 is brought in, this has no hope in competitive Indian market.