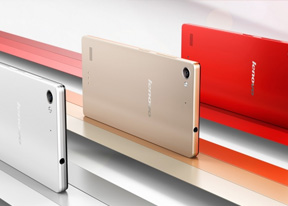 where can I find vibe x2 speaker extension of jbl ? please reply

Thank For The Inform

pls takecare while your buying vibe x2 ap lenovo mobail.mother boad damaged within 20days
my phone is still under repair....not yet.........

OMG! Battery only 2300 mah?! They should pack atleast 3500 mah battery. No wonder, user are complaining about its battery life in lenovo forums.

Its ok if not have extra slot for memory card as long support OTG cable which we can connent USB pen drive. Its ok cannot open the battery cover because today we can use powerbank. If lenove make it support OTG Cable and good GPS receiver.. I will give 4 star for this phone.

i like the design, and i dont see it copy anyone,

hah! this looks like my experia z3 copper. damn copycats!

Copy of Sony. These chinese companies must look for new design seriously

I don't know about europian market , but here in asia vibe x2 costs only $200-250
all other phones except honor6 are costs more than what x2 costs !

AnonD-321322, 19 Dec 2014The iPhone itself was a modified copy of an unused Sony design. Steve Jobs always asked his... moreWell said

Nice phone (except the battery) for it's price. :)

AnonD-4340, 19 Dec 2014Nobody cared when Samsung copied iPhone?? People are still talking about what a shameless dire... moreYou seem selective about forgetting that Apple also copied Sony, its not just Samsung that copied others. Every company does it, you follow the trend for better profits if you can't set it yourself.

As for Lenovo, they are downright mimicing lol, but uglier than the originals.

AnonD-265153, 19 Dec 2014Samsung copied Apple's design on the first Galaxy S series and nobody cares. Lenovo does the s... moreThe iPhone itself was a modified copy of an unused Sony design.

Steve Jobs always asked his designers "What would Sony do?", when creating new designs. He admired Sony a lot, for its designs. He openly said it.

Its business, everyone does this some more blatantly than others like Lenovo.

Nita, 19 Dec 2014This Chinese cellphone look like my z2... Chinese company alwasy copy from othersIf they copy the design of others then they wont have to spend a lot on designing their own phones. More profit for them. Its a shameless move though...