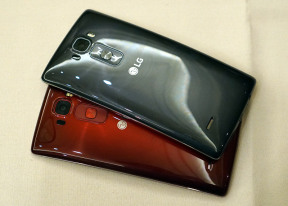 Arcane, 05 Jan 2015I think it's really ugly. The backside is way too glossy and of cheap plastik, the front is no... moreNote 4 edge has a curved display. Not a flexible one. iPhones have the only displays which can be curved and bent. :D

The curved screen looks trippy when you scroll. I will admit, the bezels are not as thin as they should be. Still. Take my money LG

Ergonomically incorrect design. Pocket unfriendly in everyway. Large bezels, orrible glossy back. Non removable battery. I'm not understanding this ridiculously out-of-scale concept of the advantages of a 5.5" curved screen unless you're holding it millimeters from your eyeballs! I applaud their attempt at innovation, but I just can't see what they consider 'benefits' over the quite obvious disadvantages of something that will rock when you type on a flat surface. Unless they make the 'curved' shape adjustable. But for me, it's curving in the wrong direction for my pocket!
Discuss please!

even 8 cores, still can't leave behind the phone with 2 cores only.

I find that LG makes the best phones : G3, Nexus 5 , Flex and now the flex 2. There phones usually have really high specs.. So LG FTW

not only mobile lg curved oled tv are best in market .

The Geekbench comparison is VERY sloppy.

It looks like the Geekbench multi-core is used in the chart.

Anonymous, 05 Jan 2015Best smartphone of the year, no doubt!We've only just started the year...

Simple... yuck. It is the ugliest phone in 2015. The hardware is one of the best for the time being but soon it will be outperformed.

The Snapdragon 810 chipset will probably get so hot that you can easily bend it back.

I think it's really ugly. The backside is way too glossy and of cheap plastik, the front is nothing special and it's still to big.
I don't see any point why anybody should buy a curved phone and I really don't know what's the meaning behind a curved phone. Can anybody explain me why to buy a flex phone?
I mean Note 4 Edge also has a curved display but this one has some real function whereas LG Flex hasn't.
Sure, it's damn fast but any new high-end Smartphone in 2015 will have the same or better specs.

Much similar to the G3 but daaaaamn that back is fugly!! Who the hell woukd want all that gloss -_-

There's no more Glance view like feature on Samsung's phone. The S4 was the only one to get it GSMArena! Even S5 has an option to only turn on the screen and Alpha nothing at all. Samsung screwed hard on this option.

Best smartphone of the year, no doubt!

Shut up and take my money!!!

How about being fair and not putting it side by side with the i6 but the i6+!!

:o i want graphics benchmark ! see how it compares too k1 :!

shut up and take my money :)

You know, kifu, it's a press event, where the photographer is carrying his/her laptop, camera, lenses, chargers, among other stuff and the only other phone he/she has is his/her personal one - apparently an iPhone. Hope you don't think each reviewer is carrying 10 additional phones just for comparison reasons on a dedicated press event, probably thousand miles from the company's office?

Once they get the phone for review I bet they will compare it to other devices.

AnonD-333110, 05 Jan 2015Please GSMarena, In your pics stop comparing new smartphones to that overpriced outdated iphon... moreOneplus, Oppo, Xiaomi, Meizu Moto. these are all no name products in developed countries, people outside of india and china also read this an have never heard of this "brands"-......but yes stop comparing everithing to the Iphone like it's the holly grail