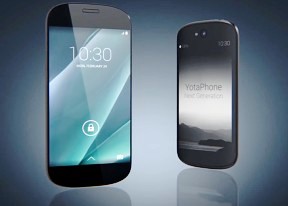 hi guys incase you want to get the yotaphone don't I got it and under two months it had issues...and it restrts often ..I went on xda and lots of people had ISSUESSS! from the 14th of December 2016 all service centers around the world would stop fixing yotaphones. Secondly their Customer service is terrible and the phone easily developes problems. the first is you'll lose signal a lot and the second is the edp secondly screen would work partially. as tempting as the phone looks , the stress that comes with it outshine the benefits

When ill it come on latest specific feature 4g

When will the phone will be available ???

This phone is made by ex-Nokia employees, know working in Russian mobilefirm located in Finland.

Disappointing your battery test, this phone deserved a dual test, in which we knew what his performance with electronic ink display.

This phone is exactly how I imagined the Amazon fire phone would be. If the E ink was a kindle reader it would sell well.

Aanrii, 31 Jan 2015The name Yotaphone is a natty change of the name iPhone. Yota is letter i in Greek Language.Not true at all. I'm Greek, hence I know that you're making things up.

Sticking on the screen protector looks like a nightmare!!!

The name Yotaphone is a natty change of the name iPhone. Yota is letter i in Greek Language.

Yotaphone is available under 200 Euro in India

Kurlander, 28 Jan 2015Only problem - high price!Yes, its an interesting device.. price is a big let down..

django, 28 Jan 2015waiting for samsung phones to have this feature :PWon't.. Samsung is only interested in gimmicks..

6:23 hours of web browsing on the main screen. Web browsing however can be done on the e-ink screen too, as can most of the everyday functions such as text messaging, dialing people, etc. So what is the battery life if you use the e-ink screen like? I believe that this is the main selling point of the phone and what most readers want to find out on your otherwise very in depth review.

waiting for samsung phones to have this feature :P

It needs a Bumper case.