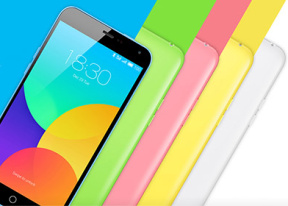 Subtitles are supported, but our unit had some issue with the encoding - regardless of the subtitles language, we always got Chinese characters. - GSMARENA

NO, you can play all subtitles, but before transfer them to phone you have to open them on the PC with Note and convert them to UTF-8.
Regards.

Anonymous, 28 Mar 2015Respect the copy right. Come up with something original would you meizu?Meizu copied their own design http://www.gsmarena.com/meizu_mx_4_core-pictures-4697.php
The original Meizu MX was announced in April 2012.
So Apple are the ones who copied Meizu.

Anyone has any idea when one is coming to UK?

Respect the copy right. Come up with something original would you meizu?

Anonymous, 28 Mar 2015I dont like iPhones but I prefer the original than this copy. I think that this phone is for... moreMeizu did NOT copy Apple. The Meizu m1 Note looks like thier old Meizu MX phone that was released a year before the Iphone 5c.
http://www.gsmarena.com/meizu_mx_4_core-pictures-4697.php

So Apple were the ones who copied Meziu and Nokia.

which one mobile should i buy......Meizu m1 note or Hawai Honor 4x..For Best selfie camera....

What a beautiful phone! Other OEMs must take note...

Note? Really?! I don't see any mention of an active digitizer. Another generic China-made ripoff.

I dont like iPhones but I prefer the original than this copy.
I think that this phone is for chinese people that cant afford an iPhone.

Why not call it what it really is? This device isnt attempting to hide its true nature, an iPhone 6 Plus copy, and it fails at it.

Meizu's lower priced phones are actually too good. It's an uncommon problem but it's most likely the reason why they had to recently lower the price of the MX4 Pro; to compete with... themselves!

Great thorough review as always! Could you also test image quality in low light situations? That has been a warning sign on Chinese reviews and it's the only thing stopping me from buying this awesome value phone..

in other way, if you are not in europe, it's a good phone merging nokia and meizu designs. the one that was blatantly ripped off by apple.

I just got mine yesterday from AliExpress for $200 (to Mexico).
Best phone I've ever owned (I haven't owned many phones, actually).

I don't wanna make a review here, but it's totally worth the money. The specs and the performance are amazing, fast as hell. The camera is gorgeous and the screen is beautiful.

Between galaxy note 4 and iPhone

GSM team will you please suggest a perfect Midranger ? You comparing a 160$ phone with 300$ phone , comparing with C3 is waste of time ! What is the logic behind the comparison ? Compare This Beauty With Under $200 Smartphones , that will be more better and Specific .
There isn't any Powerfull and FeatureRich Smartphones At $160 , so Definitly Meizu M1 Note Is The " PERFECT MIDRANGER" . no one can beat It when considering the Price Tag .

Maybe you should say that this phone doesn´t work with the best LTE band (800 Mhz) ... so for me it's not worth it.