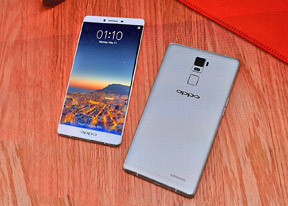 Mobile is the world best. But price something is wrong.. So.price is down appox..

Oppo announced they sold 5 million R7 in 6 days, joke of the century lol

oppo, 24 May 2015Well you should also consider the quality not just the specs. OnePlusOne have problems with it... moreOppo doesn't make the OnePlus One

Anonymous, 22 May 2015Hey... U say oneplus is expensive! Considering its specs it is the cheapest phone in its brack... moreWell you should also consider the quality not just the specs. OnePlusOne have problems with its touchscreen and lately they try to fix them with a new firmware but with this new firmware there is a problem with the battery drain and they had to revert the firmware (you can read about it on ubergizmo). And this is over a year after the phone was released for the first time. Also a friend of mine said he will never buy again OnePlus phone because he also had problems with it. For the prise they are selling it I also expect to get some quality. So go ahead and buy it if you still think it is worth it.

oppo, 21 May 2015Oppo, OnePlus and the other Chinese phone makers became expensive. They are not cheeper anymor... moreHey... U say oneplus is expensive! Considering its specs it is the cheapest phone in its bracket! Go out and bear some knowledge man!

I dont know why but for some reason that bezel less screen is begining to appeal me!!

Oppo, OnePlus and the other Chinese phone makers became expensive. They are not cheeper anymore even some of them are more expensive than the competition. They are not appealing to me anymore.

So the R7 Plus is basically a huawei mate 7 haha

Huawei should sue Oppo for stealing their Mate 7 xD

Should have kept the capacitive buttons on the 7+ (but kept the screen to body radio). I'm no fan of on screen buttons.
Shame about the wannabe bezel-less screen - glass screen goes up to the edges but the working screen doesn't. Looks like they've just replaced what used to be a colored in bezel with black glass lines on the sides.

I wouldn't buy it just bcos that ugly logo design..
And plus looks nicer onthe back..

Qualcomm is accountable of this years lackluster flagship phones with the dreadful blunder of the S810.Like Samsung,other manufacturers should look elsewhere or in-house.