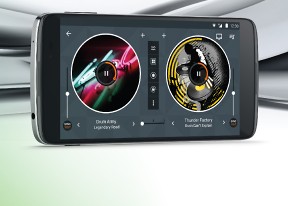 I have alcatel idol 3 5.5 I need update marshmallow

Bought this phone for just 520 saudi riyals (usd 140 approx) on eid offers here. This one is a stellar. Used it for a week to setup before sending home as a gift. Features and flaws numbered as priority below.
1,This one performs never less than moto x or xperias to compare. Smoothness really got my claps.
2. jbl speakers made me listen to music without using earphones and it is great enough to watch a thriller. Earphones from jbl doesn't meet their hardware perfection but works true and genuine to the brand name. Jbl's audio software really handles crisp sounds both ways (speakers/ earphones) with crystal outputs.
3. 3gb of ram with 36gb space!! Wow. And that too with the strength of a Qualcomm615.
4. Screen size, design and HD views. The best and enough to beat a competitor with price tags double to this.
5. Camera is good, and if you can handle the settings, u can take excellent pics with both fronts.
6. 2900mah battery does its job, to work for 9 plus hours straight with videos and different apps install/testing. 2.5 hours for a full charge from 10%.
7. Alcatel alert on homescreen. For those who admire BlackBerry for this feature, you can watch on alcatel sooner. Premium in overall UI and service.
Flaws:
Nothing major to dislike this magic product.
1. Buttons should have been in better proportions as the handset is a phablet in size.
2. Double tap screen wakeups need a bug fix. But its a best move and works apt 90% of the time.
3. Power and earphone jacks should have been better at same side.
4. Phone is true light in weight (a plus in fact), even though it doesn't look so. Will need a protective case to add some weight.
:)
I use flagships from sony and lg since a long time, and am really excited to see this great product for this less a tag. Whoever has complaints like lagging or similar for the same spec phone as mine, i suggest you to approach alcatel for a troubleshoot coz i never felt this phone as a patchy software device. And 1st things i do after buying a new handset are,
Uninstalling junk apps including facebook (i use it less and only by chrome browser with a password encryption).
Disabling unwanted pre installed apps (news stand, google+, and simiar ones) to avoid wasting RAM and energy usage.
This works great on software.
Assuring setups of anti virus apps.
8.7 shiny starts out of 10 as my final verdict for this jumbo move from alcatel. Truly wanted to write this and thats the reason you had my time for this review!

I love my new phone

AnonD-407152, 30 Jun 2015no built-in equalizer but have jbl setting?...very weird alcatel now after taken by china manu... moreNothing strange, but it's strange because phone have performance like China car... lagging in scrolling is monster problem on this phone. you can install app with sound settings, but lag is not something you can resolve by app

AnonD-472223, 02 Dec 2015Can the 4.7" operate and synchronise Google Calendar ? And is the UI easily switchable betwee... moreUI is the like Google lollipop, but with Idol icons, that is acceptable but lagging is not acceptable, it lags in every app, it needs serious optimization from Alcatel.

AnonD-386467, 03 Jun 2015No word on lag?Lag is terrible, no one mentioned, scrolling in apps is so irritating, lower spec phones have much better felling in overall use, response of the screen is below average, so strange when you came from other phone with lower spec and you realize that Idol 3 4.7 is worst of them... I'm so disappointed with performance of the Idol 3 4.7...

I have the phone idol 3 4.7 , paid 300€ in store, before i haved LG Spirit, and I'm so disappointed with lagging on this device, LG have almost same spec Qualcomm 410 and is much much better than Idol, felling when scrolling on Idol is terrible in every aspect to app i have, on LG that's normal, scroll is like you muve the finger,on Idol that is so laggy, scroll don't follow your wishes the filling is odd, only things good on this phone is speakers, battery, camera and that's it... I do not recommend this device, everything is so pretty but the every day using is struggling, much much better experience on other phones with same or lower spec believe me, I'm disappointed 😞

Can the 4.7" operate and synchronise Google Calendar ? And is the UI easily switchable between Alcatel's own and standard Android ?

I have tried over and over to get my carrier to verify my service. For some strange reason, they insist that this phone is a "basic phone". I have data service and everything that I need for this phone to operate correctly. Unfortunately my efforts reveal zero results. I cannot download pictures from text messages nor can I send them... not to mention connecting to the web, FB, GMail, etc. I think I paid too much for this.

And I am still waiting for the Lenovo K3 Note review by GSMArena.
Thanks

Although the article does mentions the stereo speakers, it does not impart you with an impression of how really good they are. Speaker quality has always been a very important factor to me in selecting phones, and most of the phones I have owned have had very good (relatively) speakers. But this is the first phone I've had that I actually enjoy listening to music on (through the speakers), they are that good. I think only the HTC One can compare. Of course, these are still very small speakers, don't expect a miracle. But for me, they have truly introduced a whole new functionality for a mobile phone. If Alcatel can keep producing reasonably priced phones with this excellent sound quality I'll be a customer for life. (Now, If they would just make the phone easy to root ....)

As someone who has now bought the Idol 3, I can confirm that there are NO heating issues. It works quite well, though it's clear it's not a Super Powerful Flagship phone - but it's absolutely fine for most people. A few apps and games have a 4-5 second waiting for loading screen, where the animated screen is frozen, but so far it has never even stuttered during the game.

The sound is really nice, though you need a separate basic music playing app - the "mix" app is not quite meant for that (and it keeps looping songs or queues).

no built-in equalizer but have jbl setting?...very weird alcatel now after taken by china manufacturer..

wuzup, 21 Jun 2015Want to know this also... it would be better if gsmarena review tells about this.I have not heard of heating issues with the M4 Aqua or the Idol 3. Like all phones, using them with intensive apps for long periods will make the battery get warm, but that's normal. Stopping the app will stop the heating - and it won't burst into flames or anything.

The snapdragon 810 heating issues are not found in the 615.

The 4.7" is surprisingly compact and light
I liked it a lot since today I played with the just delivered new 4.7 idol 3 today
The UI is a bit weird. Maybe after getting used to it will be ok.
the phone is impressive for its unique prices.
Its a good go!