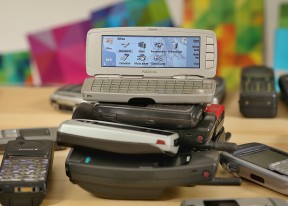 Amazing site. Following since 2007 and boost my mobile mania. Got Nokia 6120c as my the first smartphone using gsmArena reviews. Cellphone world is getting huge now. Hope to see Nokia brand to chellenge others,soon. My best brand was Sony but of late Samsung stolen the show. Your review style is still the same old, if you could update that. Specification section is need new look.Happy birthday GsmArena

AnonD-29831, 16 Jun 2015I'm glad to have worked in the mobile telecom during the golden age of the mobile phone. Today... moreRound of applause exactly what I think .

I'm glad to have worked in the mobile telecom during the golden age of the mobile phone. Today mobile phones are so much better, smarter, faster and...dull. With each new model launched we where exited to learn about the new features one would come with, even if by today's norm these where in significant. Now it's all about cores, gpu's, inches, PPI but they are all the same. Nothing as thrilling as back then...

Happy birthdayyy gsmarena...
May u review many more mobiles from galaxy or fruis n much more...

I dicovered GSMMarena too late (2010 I think) because I weren't interested in smartphones before that. Bookmarked it since then, it became my reference every time I planned to buy a smartphone because of the excellent and very detailed reviews you are doing. Happy birth day and keep up the good work!

My go to website for information gathering regarding all about cellphones since 2003 ... Thank You GSMArena for all your stupendous work ... and a very Happy Birthday.

Congrats.best and most trusted site i read about ohones.helped me alot in past few years both for buying ohones and also killing time and enjoying reading your great website.
wish you prosperity and happiness,thanks and continue the good job you've been doing.
happy 15th anniversary

History is what made our present .
Salute to the history .
Thanks , GSMARENA .

It's difficult to express my feeling in words. So much information I got here since 2003 I guess. So many phones I've dreamed about. So much excitement with new features revealed at that time, like 2 MP camera in a cell phone with 2x optical zoom (Sharp 902)!! Your website is definitely part of not only the cellphone history, but technology in general. Happy birthday and keep doing this excellent job. It's a pleasure to be part of it.

Heartily congrats to gsmarena from one of the so many daily visitors. This page opened a door to the memory lane. My first phone was a monochrome nokia phone with 4 lines of text per screen and memory of 20 sms! And I was much younger and phone were just tools to interact with people. They were just means to an end. We used to ask people to send us messages, ringtones or picture messages. I remember spending time to choose which sms to keep and which one to delete.
Now phones are much more advanced. They can keep us immersed hours togather.... I am no exception. Now the phones have become an end in itself, not just means to an end. The way we think has drastically changed with mobile tech advances. And we know where to look to get the right phone for our need and price....

I have been using GSM from 2001, it was sooo different then. Anyways Happy Birthday GSM :)

Happy Birthday to you, keep up the good work!

If you happen to visit Japan back then you will be amaze by their phones. Twas quite awesome than the rest of the world.

I can recognize at least 10 of those phones. Mobile phones have quite evolved since I was a teen :3
Happy Birthday GSMA.

Its a shame to see all the pioneers of mobile phones are either gone or struggling to survive,back then there were some amazing ideas and pretty cool designs...now they look alike,safe slabs all uniform in design...

Bookmarked and read news everyday from GSMArena since 2005. I'm started following Mobile Phone trend when I got my first ever mobile phone. It was Nokia N70. :)