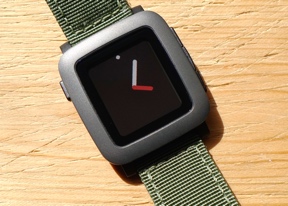 I ordered my pebble watch time today 108usd. Nice i love it. 4 to 5 days battery fantastic.

I have a pebble time black and after a few days i noticed some slight scratching on the outer bezel, i think the matte finish on the metal bezel is a bit prone to scratches. I suggest getting matte decals to protect the bezel.

overall the experience is great specially the reply with voice to text!

richard, 23 Jun 2015Better to come up with the design on having solar charging smartwatch. The bezel surely is big enough to get some solar charging action going

Better to come up with the design on having solar charging smartwatch.

while the pebble classic gave off a impression of TFT touchscreen (often mistaken as touch-based by strangers), pebble time gives off more plastic (why grey/darkgrey and not sleek-black like the classic?) and cheap look than it's retail price suggests.

Better invest in time steel if u r in it for the long run.

Anonymous, 17 Jun 2015Finishing every sentence with the word really, in 2015....Really?Grammar police... really? Can't you see it is a convention that is used... really?

Why does it have 2 bezels?

Bomj, 17 Jun 2015Android only? Next.If you read the whole review properly you will notice they pointed out that it's apple that doesn't support some of the features not Pebble. Great job Pebble and the developers for making another sensible smart watch. Already on my Christmas wish list

Starting to regret that I switched from Pebble Time to Steel. I do not think Steel will look this good. That last picture in the conclusion page is just OMG!!

Anonymous, 17 Jun 2015"Sunlight legibility of the display is top notch So is the 30m water resistance" ... morelol with led backlight it should be excellent

Need to highlight that Pebble is an excellent sports watch with integration to Strava, Running apps, 3rd party app support with heart rate monitors, great for swimming, activities in heavy rain and even skiing. What people do not realize is the screen is always ON and you can view it in bright sunlight to see your speed, distance and heart rate! The original Pebble I have can take a beating as I've banged hard against many surfaces, leaned into trees whilst mountain biking and after two years I still get 6-7 days of battery life!

A minor correction to this (otherwise excellent review):

The packaging shown, is not the retail packaging as indicated. That's the shipping packaging for Kickstarter backers. Just like with the original, classic Pebble (which had similar packaging on Kickstarter), this packaging was designed to be cheaply mailed internationally.

Bomj, 17 Jun 2015Android only? Next.It's not Android only. It's officially supported on iOS as well, and has third party support to work on BlackBerry and Windows Phone too.

Really good gadget.
This is really going alternative to mainstream android-only / ios-only smartwatches which are built to quickly become obsolete and keep you buying exclusively from them.
It's great to see someone keeps thinking out of the box!

If there were smartwatches on the market that had the great screens with touch and the battery life, then fair enough I'd accept the criticism of this watch, but a week+ battery life is going to hurt the other companies, so fair play to pebble, they got the unique selling point spot on, even if it's not the best looker.. Function>Features

Nice smartwatch. Who cares about a color display with 16 million colors on a SMARTWATCH? To zoom in on a 1.5 inch display and show pictures taken by your phone? This smartwatch is going to give you some good battery backup, instead of putting the damn thing on the charger every 12 hours or less.
"Lets see what time it is. Oh my, the thing is empty again..." Pebble knows how to make a smartwatch which lasts for more than a few days on a single charge.

looks like a toy watch, imagine all the hate if it was samsung or apple that made this watch.