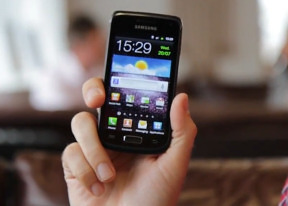 does it have USB on the Go.
since, android os 2.3(ginger bread) supports USB OTG.

can any Pliz tell me , does it supports USB OTG?

lcd display...crap...i was hopeing that they put an amoled (or super amoled) in it...then this would have been the best phone

Obviously this one is the S2 mini, with a modified design.
http://www.pocket-lint.com/news/39170/samsung-galaxy-s2-mini-leaked
Samsung had to wait for their own S2 to be successful, before launching this one. Otherwise it could have cannibalized the S2

did u notice gorilla glass is not good for chock,many iphone4 break... better to have a non gorilla and put a screen cover.samsung always use fux-metal=fingerprint trap,these phone are still expensive around 300 euro...

If it becomes available in Australia I'll be among the first to open my wallet.

is this the GSII mini?

Flow, 30 Aug 2011If it plays xvid dvid formats I'm soldAll androids can play xvid thanks to apps you can easily downlotad.

If its gonna have gorilla glass means, its gonna be good mid range smartphone which can compete Moto Defy +.

For indian conditions the phone may not suite as it has poor sunlight legibility....

no matter, 29 Aug 2011I was hoping a more improved Galaxy ACE, but this is pretty the same old ACE apart from the bo... moreYou drunk dude? I'll try to enumerate some major differences between the 2 phones for your enlightenment. W has a 1.4 GHz CPU while Ace has a 800 MHz one. W has a 3.7 in with resolution of 800 x 480 while Ace has 3.5 in with a resolution of 320 x 240. W can record and playback 720p videos natively while Ace cannot. W has a front facing camera while Ace has none.

These are just some, but the point is, this is not a 'pretty much the same' device as thr Ace.

its specs are good enough...but its look like a low standard fancy device..!!!!!

I was hoping a more improved Galaxy ACE, but this is pretty the same old ACE apart from the body. Not worth considering.