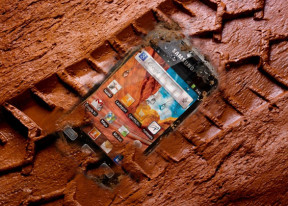 I'm agreed with suan which all tough phone should be. In additional it nice to have a solar panel to recharge battery when I going travel.

Second things is a compass and detail map able to download before travel which can used without coverage line & GPS.

Third, Emergency all without boundry i.e. when I travel from Malaysia to Somalia, I had an emergencies number to call without change the line.

forth, setting to higher pixel for camera is very usefull when i want to take any evidences in my travel.

Don't hestate to ask a right travellers to get an idea. Please make a better phones in future or you at the same level as many manufacturers doing the same thing - bored.

AnonD-2815, 05 Sep 2011Motorola defy is 100 times better than this ugly crap. Defy and defy+ has display resolution h... morewhen you have s2 and defy on your front, you won't really see the difference on their pixel density although defy is higher.. but what you will notice is the super amoled plus display of s2..

AnonD-2815, 05 Sep 2011Motorola defy is 100 times better than this ugly crap. Defy and defy+ has display resolution h... moreYou are so right, I'll never buy an Android phone if it's not Motorola, Samsung phones are the worst made, I've always used Nokia, but Nokia won't make an Android phone, so my next choice is Motorola, never crap from Samsun or Sony Ericsson...

Motorola defy is 100 times better than this ugly crap. Defy and defy+ has display resolution higher than galaxy sII.

The real world comes with rain and dust, even in cities. IP67 should be a minimum requirement for ANY mobile device.

I wonder if this phone can handle sea water..

There are problems with 'rugged' phones, first has to be the mapping with GPS, they really need onboard maps especially if you are away from any network coverage, requiring connection for Google maps for example is silly if they are designed for outdoors, though a proper map is really essential, though too many people these days rely on phone mapping.

Secondly is the problem that smart phones do not tend to have antenna that are as good as dumb phones due to lack of space within phone chassis.

then you have the problem with touchscreens and gloves, maybe a nice little extra to be packed with smartphones is a pin/badge that can go through a glove finger tip to allow phone usage whilst wearing gloves with buying special gloves.

A solar panel for trickle charging might be a good idea too, it's not like there is a power supply attached to every tree for instant recharge.

whats is exactly samsung trying to do here? make a phone with ugly screen or chug a downgraded android phone for the masses? oh, ok fine we get it, its supposed to be waterproof but ok it failed. Epic. lols

xperia active is still the best among the four rugged android phones.. but if your prefer larger screen then go for defy / defy + ..

Only way this can compete with the Defy is to be $50 cheaper.

be it *WVGA and with NFC i would buy it. but it's not, so samsung won't get my money.

price it lower than defy and fix the water resistant issue and it will sell ok...now samsung is looking like what nokia was before...pushing different model to each market segment...

I want to see the phone like this with Galaxy SII specs. Even though the price would goes actually high, someone would pay for that price.

The Defy+ wins in this round for tough phones. WVGA, 1GHz processor. (But comes cursed with the ugly Motoblur, of course...)

How can this compete with the Defy/Defy+?? Not even a WVGA screen compared to Defy's FWVGA (480x845) sheesh!