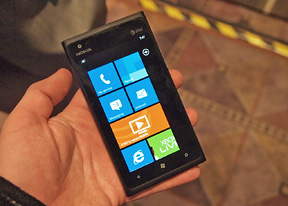 nokia lumia however everybody is applausing it a lot and comparing it with iphone 4s.but i dont think it is dat much good it just have one plus point in comparison to iphone 4s and that is it has screen of 4.3 inch be grown up stop comparing it with i phone http://13mania.com/1567/nokia-lumia-900-became-the-best-smartphone-in-the-world

Anonymous, 10 Jan 2012Microsoft is killing Nokia. In the old days they focussed on always having the most superior h... moreNokia 900 is not yet released, how could they catch up before it's release...? Dumb

u wil never see those features on window phone.

they are not there so microsoft canget better deals with contend providers, but still who gotta make stuff for a dead platform?

Anonymous, 10 Jan 2012Just a mid end solution with a big screen and crappy osif you dont like it, dont buy it and move on.

i personally think that this os is very good indeed.of course it needs improvement like mass storage,skype video call,drag and drop file transfer.still i like the ui

SB, 11 Jan 2012I own a Lumia 800 and it not only feels great in my hand but it performs really well. So, to c... moreI agree with you. However, I would like to have Micro SD expandability and drag and drop file management.

I hope they will release Skype video call app for this phone . Skype is more widely used than Tango.

AnonD-21645, 10 Jan 2012Hmmmm... I think to be fair Android as an OS definitely used to be resource-hungry and lag.... moreI have already a "smooth ride" on Desire Z with single core, 800 MHz ARM v7. Yep, all thanks to built on pure Android 2.3.7 Cyanogenmod 7.1. It runs about 3x faster then the same thing with Android 2.3.3 and HTC Sense - no lags at last. I think the same problem is with Samsung's "TouchWiz". All these customizations are highly unoptimised and they do nothing special except for eating out too much CPU cycles... Luckily Microsoft didn't allow producers for that. Right decision, I rather would like to have a very fast OS without 3rd party customisations and decide whether I want to customise it here or there.

WP7 has, gone from 50k apps to 55k apps in under 2 weeks. WP7 phones now have more fully native apps than Galaxy Nexus. It's kind of fun watching a friend with GNexus complaining about app super support while android fans here clamor how WP7 doesn't have apps.

After checking out this phone, I think I'll stick with my Nokia N95. It's much more versatile than the Lumia and can be depended upon with connectivity.

Love the design on this thing, and the display is quite nice. Now if I was in the market for a Windows Phone, this would be the one I'd most likely pick up.

I own a Lumia 800 and it not only feels great in my hand but it performs really well. So, to criticize a phone based on specs (without using it) is baseless.
Nokia & MS have worked on the existing issues of 800 and that's why they have a better battery for the 900. They also have a front facing cam which is going to attract a lot of people who like using it for video calls. I think 900 is going to be a great phone like the 800. Considering that WP 7.5 is a considerably new mobile OS, a count of 50,000 apps is not a bad count. So, please try it before passing any judgement about the phone or the OS :-)! Cheers!!

fail_is_strong, 10 Jan 2012Sadly, this is weak HW, with worst system on market (no apps, no functionality, terrible scree... moreSadly u r just saying something that even u yourself do not know yet. No one ever try the phone yet except for Nokia people. But if Elop and the Microsoft guy have confident in the device, it does shows that the device might be promising even though is does not have the gigantic spec.

fail_is_strong, 10 Jan 2012Sadly, this is weak HW, with worst system on market (no apps, no functionality, terrible scree... moreIt has 50,000 apps available. A bit more than 0.
Also, it has functionality. If the phone had no functionality, it wouldn't turn on. If it didn't turn on, you'd hear that from the showroom floor.

Might be worth at least trying it... or if you don't want to try it, just don't comment.

Anonymous, 10 Jan 2012Microsoft is killing Nokia. In the old days they focussed on always having the most superior h... moreIt is doing very good but not great in some part of Europe like UK and Netherlands.

nice phone. i think Nokia should aim people in age above 30 with this device. is simple smooth and just nice to use it. it is not for youngsters hungry quad cores and 1Tb or more of storage.

Sadly, this is weak HW, with worst system on market (no apps, no functionality, terrible screen resolution) and huge price.

Microsoft is killing Nokia. In the old days they focussed on always having the most superior hardware. Now they have hardware which is FAR INFERIOR to the competition. It doesn't help - especially when also trying to push an OS which people still have questions about. I'm not saying they have to be the best screen and best cpu and memory etc. But the fact is if you wanna take on iphone with its MASSIVE head start, and they release it with a new OS you better make sure that you can match or exceed the hardware at the very least. Look at the storage for example - 16gb vs iphone offering 32 and 64gb. And they think buyers wont consider this??? Nokia need to get their heads out of the clouds. Microsoft is leading them to ruin. Maybe the 800 is doing well in europe, but I dont see the 900 catching on in the US

Although Lumia 800 will be released in US unlocked through MS stores, I've heard.

Yeah nokia 900 is good one but it still isn't a flagship. Flagship means people really going bla bla with the look and spec. Design is very impressive but specs disappoint me very much, look at camera the htc titan 2 carrying 16 mp. Storage limited to 16 gb(iphone 64gb). Screen is pretty much good. Processor single core is ok but still should be dual one(mainly to lure people). Mass storage is missing. Lack of non quality apps(number sometime counts). Front facing cam must have been 2mp instead of 1. Still its a worthy buy and a overall sexy look counts.