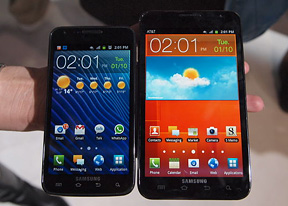 AnonD-16342, 11 Jan 2012I forgot when was the last time when I looked at a new Samsung Device and said, that looks dif... morethen you havent seen seen samsungs series nine laptop its the best looking laptop on the earth :) and their leds tvs are awesome :)
i dont know why gsm arena didnt talk about it.

thanx to the gsmarena for this review

I have to kind of agree with everyone here (as a GS2 user) that Samsung definitely need to step up a gear re: handset designs...

To be honest I'd say they're almost 'too' focused on the tech side (not that I'm complaining - most phones coming out this year will essentially be the same specs as the GS2) BUT I'd like to have a desirable / funky / quirky handset too!

Sammy is all about substance over style - I get that... BUT here's hoping that the GS3 comes along and it doesn't need a facelift!

Having said all of this - if you look at Sony's new handsets and HTC's they're all pretty bland...

If the Galaxy Tab 7.7 can keep the Exynos with its LTE, why can't the other devices!?

And the Exynos isn't even that great anymore....

AnonD-16342, 11 Jan 2012I forgot when was the last time when I looked at a new Samsung Device and said, that looks dif... moreExactly! They all look the same with the same old boring design. Samsung smarttoys are ugly and not easy on the eyes like the Lumia 900, the Android killer.

In every details, iPhone is better than these phones.

I forgot when was the last time when I looked at a new Samsung Device and said, that looks different that the previous others.......

this is so boring, yawn! Is this CES of my memory lane? feels like I have seen it all.

Anyway, the other new device is the Samsung Exhilarate. It's made of 80% recycled post-consumer materials, AT&T advertise it as "the first 4G LTE smartphone built to meet many environmental and sustainability standards". It's got a 4" Super AMOLED screen and eco-saving software features.

i bet there are a lot of "post-customer materials" put into this phone.

what do sony really bring to the table other than last year's hardware?

no news about Galaxy S3?

no thanks samsung. Sony Xperia is my choice :)

Boring, don't like huge devices, Sony is much more interesting.

Ok whatever, still getting an Xperia Ion

The Galaxy Note is a monster... in size that is and in specs. But it's too big for my liking. I'm happy with a 4" screen on a medium size device. The new Sony Xperia really does it for me.