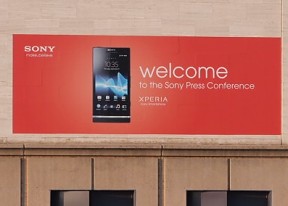 i loved sony ericsson phones but sony....for me it will take time to get used to sony

Why people always mention about micro sd slot? Iphone dont have it but still people want that phone badly...

We cannot expect all brand put out all high end device at the same time.. not all user afford to purchase higher price phone. Sony take a good step by introduce high, mid and low end device that suit everyone budget. We are human always anger to have more and more.. but finally its just a
phone guys.. not a gold.

with the new photos of Sony Xperia P, i got a little disapointed with it. The images in it was kinda yellowish. This plus not so powerfull battery and no microSD port, it is hardly a phone to look forward.

Xperia U whitepaper says it can record videos only at 720p. Also, the availability of Smart headset is market dependent. It won't be available (free in the Xperia U package) worldwide.

AnonD-21645, 27 Feb 2012Oh dear... Where is the Ion indeed?!?! The problem with the Xperia S - it's nice looking... moreThey announse that xperia ion will be worldwide .
I think this is good enough as a flagship .
And the white magic LCD is good enough . Will boost LCD contrast to be near to amoled and provide accurate colour .

best brand at mwc, as always

can the light thingy be use as led notification for miss call/ sms/ indication light? its a SONY yeah....

Though I'm a Sony fan, for me this is a disappointment.
Other makers sport their handsets to show the technology we are in. But Sony, seemed to showcase a mid to low end kind of phone. When they announced Xperia S I thought that this is their time, but P and U?
Sony what do you want to prove in these handsets? Do you plan to competing on Nokia only?

thetruth, 27 Feb 2012That 12MP camera seems pretty good, almost equal to the Nokia N8's camera. The design look... more"The Android UI is so boring and dated, and not to mention laggy"

You obviously haven't experienced ICS then...

It's in a different league...

(and to be fair to Android, the latest versions of Gingerbread have run as smooth as silk - especially on the higher-specced handsets...)

But ICS is a real step up... it rivals anything out there...

What I didn't realise (it pays to look a bit closer)

IS THAT THEY ALL LOOK THE SAME!

So on the face of it, someone wouldn't know if you were holding an entry level Sony phone or flagship...

At least come up with different designs for different classes...

Sony has really disappointed unless they reveal the Ion soon...

Where is the Ion indeed?!?!

The problem with the Xperia S - it's nice looking and all that jazz, but limited hard drive space kills it - you start putting a few decent games on there, recording a few hd movies, a couple of gigs of music, a film or two - and you'll be out within no time...

Cloud storage doesn't work with mobiles because of the battery consumption / data usage and need for a signal - it's not immediate either...

I think it's massive fail revealing the Xperia S so early in the year, without a real flagship to show at MWC, all they're doing is showing mid-low level handsets...

Not good... was looking at getting a Sony phone for the smart accessories (which look nice) - but can't afford the lack of hard-drive space...

Sony is back in the game,thats for sure.these are some amazing phones people will surely want to get.SONY YOU ARE THE BEST!!

and battery seems to be smaller too....:(

Am I the only one who think that the transparent strip looks wierd and unnecessary?
Xperia P's back and side surely looks nice, but then the front side is kind of busy. Black plastic around the screen, transparent strip in the middle, and alumunium bottom are too much. Not to mention the bad looking of "Sony" mark.
As an owner of X10, I think Sony needs to pay attention to details in terms of phone design. They've gone backward after X10 in my opinion.
The spec is okay I guess, all android seems to be sporting almost same spec at the same price anyway.