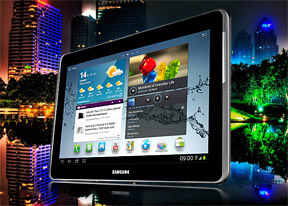 lala, 12 Mar 2012buddy has tab 1, and when i said i wanted to buy he recommended ASUS Transformer Prime, which ... moreYou should check out the new Samsung Note 10.1. Released this week. Has a quad core 1.4G processor ice cream sandwich. I just bought a tab2 and i'm dissappointed I didnt wait

Galaxy tab 2 is nothing special,n not good enough is too simple. :-(

me, 08 Mar 2012me toAnyone with a calling associated with prophecy on their life may soon discover they've already become one of several groups regarding Gods servants who definitely are the most likely to end up unheard, scorned or perhaps ignored. That's in the event the reporters operating across the beat determine for getting adventurous. At various times they have spoken about individuals who have done well in the usa: They need to give time for the nation that's done a whole lot for these individuals. best family tents review , see this black man

i'm the user of GT-P7500, i little dissapointed when see the spec of this tab2 10.1. Samsung should have using quad-core than dual-core prossesor. And for the built-in microSD slot, voice communication, ics os is a plus

buddy has tab 1, and when i said i wanted to buy he recommended ASUS Transformer Prime, which i bought and am speachless :) well at least till updated prime with full hd comes in autumn it will be the best android tablet outthere 4cores, 1gb ram, android 4.0, well kindof crying cause of not having full hd but somehow its strange that manufacturers could give us complete solution yet they dont ...

I really Google and Android tablet maker need to stop for a moment and think about what makes a great tablet.

Having these amazing specs does not seem to be attracting customers. The problem is you buy a 10inch and you will only find about 270 apps to go it. Yep other apps work but the scaling is terrible. It just isn't a nice experience. Other media like time and music are woeful plus the music experience only seems to work in the states. Yep I can put a memory stick into some of them and even add a keyboard like the transformer but the lag free and a choice of over 200,000 is just not there. Even if you don't like Apple they have sorted it out there is a wealth of apps and the experience is smooth. Telling people a tablet has quad core but having a woeful amount of applications is a bad selling point. Google are geting kicked in the tablet game and rightfully so in this area they have lazy. Yes Google want to realise a 7inch tablet but size isn't the problem a great wealth of media to consume is.

Anonymous, 07 Mar 2012My Asus transform 101 which was released a year ago has better specs. I seriously dont know w... moreme to

My Asus transform 101 which was released a year ago has better specs.
I seriously dont know what Samsung is up to.

I still don't see what is the use of this. A thing with no purpose.

already had 7+...had no good reason to buy this 10inch

EPIC FAIL for sure. C'mon.
hopefully galaxy s3 won't be a failure as well.

sound quality is amazing.It's like 2 big speakers.
that's very good that support SIM and MicroSD.
this will be better than other android tablets.

galaxy tab 2 with lower/same specs..EPIC FAIL SAMSUNG...this is the same as the galaxy tab 10.1....ur stupid sometimes sammy...what a waste....

The stupidity of many of the well known tablet makers is that they have their own proprietary charger. For example, Sony Tablet S, Samsung Tablets, to name a couple. So if you happen to need to charge off the portable charger, you are out of luck as it may not work via USB cable. Hence the hesitation to purchase one. Instead we might consider the Made-in-China option. I wonder why aren't they able to standardise on the micro-usb charger like what the Europeans are planning to do for mobile phones? A simple universal charger. There has to be a way, to avoid carrying around different types of chargers.

And of course...price. Could still be better.