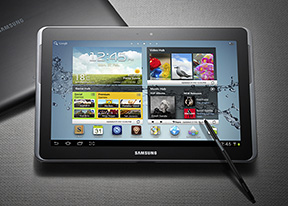 just wanna say..y would you leave xperia s out of benchmark test? is sony the inferior brand now?

I just saw that video and the way all these apps are overlapping each other is freakin AEWSOME!!#@!#%@#$% My ipad 2 doesn't do that. Are all android tabs like that or just the note?

Without a doubt, the Galaxy Note 10.1 is the beginning of the end for pen and paper. For it's going to make life easier for the seven billion people across the world.

Looking very good but as long as there aren't any good pdf annotation apps, like Bluebeam Revu or PDF Annotator, I'll keep on waiting the release of a similar tablet but with Win8 on it.
I thought Samsung made a deal with the makers of iAnnotate to launch a special version, but I don't see that app in the demo. Anyone knows more about that?

I hope Samsung will launch such a tablet at the end of 2012 with a Wacom digitizer.

Then I will find the tablet I"ve been waiting for for many years now.

Did samsung discard the plans for the rumored 11.6 ?

Speaking of sketching this tablet's pen looks way more capable than Motorola XOOM 2 one. And Samsung did it again, not even half Motorola's built quality, limited OTG capabilities(no micro USB), limited Camera, same Touchwiz, same Touchwizz and that dumb ideea of retractable dock with somethings at the bottom(Hello, Samsung! This would make a point o IOS. Android homescreens are widgetable! )

Finally I seen something smooth performance Android tab is out!

Probably I will grab this baby unless something more interesting is out. :D

If i lose that S-pen, I have to fork out money to buy another. Lol

im the only one that can see a clearly metro UI all over this? of course with hd resolution and all. but still, i can see Microsoft sues coming up!

So thanks for the preview, and I see that the product is very interesting. But please, stop positioning this product as a "niche" - this could be the beginning of the end for pen and paper, and a great help for several billion people.

RRRRRRRRRRRR, 06 Apr 2012Can we use it without S penOf course you can use it without the SPen but then you could just buy the tab 2. This is for people who feel more comfortable writing/drawing with a pen and for example can't justify the cost of a lenovo/fujitsu tablets which are in the US$1500 range. I myself have an old toshiba M200 which uses the same wacom pen. It's old hardware applied to a new OS.
On a side note (no pun intended), I believe the SPen is the really strong point in the galaxy note (phone) not the "new form factor" as i read in some articles. People have been waiting for a device with that capability, and it's weird we had to wait that long. I know the htc flyer and some asus tablet had it but they wern't marketed properly.

Bb231, 06 Apr 2012Fail! They should of upgrade on something we use 99% of the time. The fricken SCREEN! What the... moreIt's a Wacom active digitizer system, and not a resistive nor a capacitive type. It's great for changing pen widths from levels of sensitivity from the S Pen for digital artists.

i was hoping that atleast this will have a standard micro USB. So i'll continue waiting for a better one.

Just got ma 7.7 tab, belive its enough unless u reallly realllyyyy need the pen...

Fail! They should of upgrade on something we use 99% of the time. The fricken SCREEN! What the heck is a s-pen going to do for me or majority of us. Way to step back in the past Samsung.

I'm so excited with this pen thing,and I want this tablet right now.p.s.imagine taking notes on meeting while your colleagues looking confused...

Can we use it without S pen

Oh man, I would line up to snatch this if this had at least 1080p resolution :(

One of the interesting devices shown off at Mobile World Congress (MWC) 2012 by Samsung was a boosted GALAXY Note to 10.1″ which retains the S Pen technology, which now gives us more screen than ever to play with the use of a stylus (that if you felt like 5.3-inches wasnt enough already).
According to IPD’s Korean daily economical newspaper Samsung Electronics delays the release of its GALAXY Note 10.1 with an S Pen to June. The reason for this change is due to an upgrade to quad-core processor hinting to Samsung latest quad-core 1.5GHz Exynos 4412 chipset.
I for a change don’t mind a small delay if the 10.1 smartblet arrives with a quad-core processor instead of the dual-core 1.4GHz processor announced at Mobile World Congress, in Barcelona, Spain back in February.
The same newspaper says that this is more of a marketing strategy since Apple launched its newest iPad equipped with A5X chipset that pretty much beats up Nvidia’s quad-core Tegra 3 CPU.