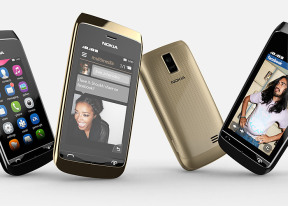 308 not sopott the pdf format

Tanuj, 20 Dec 2012you forgot to tell about processing power and how it's 1Ghz stands vs galaxy y 850 Mhz process... moreNice

I have nokia asha308 .that is good phone and good speed internet browsing and everythingGood atThis price

i am yet to tryb this phone i am just in love with nokia.

I have recently developed a liking for nokia or asha phones after seeing a lot of china based androids which packs powerful hardware but battery backup is poor i.e about 4 hrs of talktime. The basic utility of a phone(always powered on) is what asha gives you. 17 hrs talktime! This is a phone I could comfortably take outdoors for long durations. And add to it 40 free EA games, nokia store and only nokia enjoys third party app support(whatsapp). And UI, notifications, always connected. Again, battery backup! makes this king of dumbs or "lite smartphone" a phone actually!

Dear Nokia
Not because your primary OS and high-end phones are the WP Lumias...it's not enough reason to have the Asha's with such garbage specs

you forgot to tell about processing power and how it's 1Ghz stands vs galaxy y 850 Mhz processor.
othervise good review.

dudkin, 10 Dec 2012Thanks for the detailed review. You did not mention one big advantage of this phone over cheap... moreummm this is the smartphones top ten so iophne shouln't be on here it is more of a multimedia phone than a smartphone. hell it's a gameboy advance with a touch screen really also you forgot something iophne 4 isnt much of a phone when it dosnt even even make calls without dropping them

AnonD-84041, 10 Dec 2012I think the [ main disadvantage ] part need to change it. Instead of saying it main disadvanta... moreReview by T.S for Rating: My Nokia cell phone is 5 years old and still works good, but the battery life has been sldeaity getting worse, so I decided to go with a new battery instead of a much more expensive new phone. So here is what I know about trying to make sure you get a new battery and not some old used piece of crap.1)If you dont want to spend around $10 for a new battery you dont have to continue to read this review.2)there are 3 listings for this battery on amazon. one has about 30 reviews, the next has about 16 reviews and the third has about 5 reviews. the first listing with 30 reviews has a battery failure rate at about 33 percent. the second listing with 16 reviews has a battery failure rate at about 50 percent, and the third listing has only one 2 star rating out of 5 reveiews.3) now the prices, the listing with 30 reciews has a price range between $5.53 and $9.19, the second listing with 16 reviews has a price range between $6.67 and $9.19 and the third listing with 5 reviews has a price range between $7.98 to $14.08.4) I paid $10.68 for my battery when the retail price in stores ranges from $18 to $30, so its still a better deal on amazon, and my battery was listed as brand new in retail package (sold by CCM ACCESSORIES)and when i received the battery, it was UN-OPENED in a Nokia Original accessories package. besides the original nokia package, how else do i know this battery is new? If you look at the pictures of the batteries listed, they all say made in japan, my original battery says made in china and the brand new battery i received is also made in china, i cant get any original than that 5)so once again the old saying that says, you only get what you pay for works out again, you maybe able to order a cheaper battery, and it may work great, but you run the risk of having it fail, like all those bad reviews you can read about So far my battery is working really good ..

Krish, 11 Dec 2012I realy feel the phone. It,s very nice better then samsung gt5360. Thanks guys, I just about lost it looikng for this.

Not a good phone
only 1000 phone book entries WTF!

Anonymous, 11 Dec 2012LOL at these phones. Just buy a used S60 touch phone (5800,5530,5230,X6, etc) which has better... moreUsed phones have their own disadvantages and not all people dig that.
And if nokia dual sim phones r a fail then who else? they r the finest in the dumb dual sim phones catagory.

AnonD-73681, 11 Dec 2012Yes, the touchscreen is still to compromise on. For basic use the touchcreen phones are not ne... moreIndeed simple t9 or physical qwerty phones r better suited for basic tasks but maybe with this one the finns r trying to bring the "touch feel" to the less privelaged ones.for some it may be a luxury @ this price and they might be enticed into buying it.