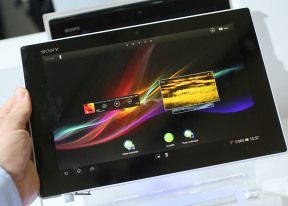 Actually, that xperia tablet z is a very good device, my only concern about Sony branded mobile devices is the screen and that's because I saw xperia z screen and honestly it's awful, poor colors, poor contrast, poor everything about the screen..But this tablet z screen is gorgeous and looks like ZL has a similar screen too..So Sony, good job with those two products..A little bit over-priced (tablet z) but still very very preferable.

timski, 20 Mar 2013Dude you are unreal, yes sony-Ericsson may have dropped the ball slightly in the past. But now... morebut too expensive!!!!

cyber, 25 Feb 2013what a shame,sony's latest phone and tablet runing on outdated hardware,display is bad at all... moreDude you are unreal, yes sony-Ericsson may have dropped the ball slightly in the past. But now Sony alone are back in the game! Beautifully designed phone, feels high end, looks high end, performs high end! The benchmarks are smashing the majority of phones out there, it might not be the best phone on paper but it is definately sonys saving grace and pass back into the high end smartphone market! and as an avid phone geek I can safely say you Sir are full of it!!

cyber, 25 Feb 2013what a shame,sony's latest phone and tablet runing on outdated hardware,display is bad at all... moreare you paid by other smartphone brands??? HAHA! because you keep on saying negative things and compare it to others but no one believes you. I never encounter problems with my phone. i am a sony ericson to sony user. and I also admire the phones of samsung and htc. your comments are too subjective. maybe the phone itself doesn't like you. HAHAHAHAHAHAHA!

why isn't there a xperia zl review?

Ainol tabs I have used are same specs to these branded stuff,, they have warranty and like these not made in japan , are made in china too,

I am sorry but Sony only makes good TV sets and excellent cameras, every thing else is overpriced!

Does this tablet have a pen??

This is a troll! He does this on various sites! He probably a Samsung fanboy! IGNORE people! Tablet Z best on market by far

This is a troll! He does this on various sites! He probably a Samsung fanboy! IGNORE people! Tablet Z best on market by far

Waow...really impressed with the Xperia Tablet Z :) It feels like the perfect tablet for me...Great work Sony. Keep this momentum up.

cyber, 26 Feb 2013i see few funny comments about my opinion,now i put the facts on the table:my english is not g... moreYour opinions are not professional dude, you're a Sony hater and that's in plain sight, thus you have so many people contesting your comments. I haven't read all your comments, but from what I did read, I've never seen you saying a single good thing about Sony's products, thus you're biased. Thus your opinions are not credible. For if Sony is really as bad as you say, they'll be out of the business already. Yet, as one of the earlier phone manufacturer they're still going strong. Not everyone here is as blind as you hope to buy all that preposterous claims you made, dude. I own a phone shop, and I know exactly how much I spent on my business, and until now Sony never gave me much trouble.

Anyone has leaks if Sony is going to release a 7-8 in tablets with similar specs? I love what I've seen so far, but 10 inch is a bit too big for me.

cyber, 26 Feb 2013i work in phone store,my job is not to claim anything,this is the real facts,most xperia's hav... moreI work at a mobile store to. Samsung phones seem to have serious quality issues. They kept coming back. Reasons from cracked plastic casing to phone refusing to boot. Never had a Sony or HTC customer returned due to quality issues. Samsung's cheap glossy plastic isn't up to match to Sony's premium glass.

I have owned an iphone 4 , sony xperia S and currently own an S3. The S3 feels right in the hand dimension-wise. The sony had a better UI from my point of view and a better camera. The iphone is good but limited environment as i learned from switching to android.

So, after using several devices including my friends devices as well i can only say that sony ZL seems to be the right choice at this moment , at least for me, because it has a 5 inch display on a smaller device. I did some research on gsmarena and i can say that there is no phone with a 5 inch display smaller than ZL...The ZL is even smaller than S3, One X, One+ but with a bigger display...
For sure it won't beat the upcoming S4 in muscle power or other phones yet to be released but having a great hardware the ZL will be definitely a great choice especially for people who are not confortable with big devices in their hands.

And there is the back of the ZL which from my point of view is what a phone needs to have on the back..it needs to stay in the hand not slip like my S3 does.

AnonD-86903, 26 Feb 2013what do you want to prove here. everybody knows that Sony puts the best build quality in ever... morei work in phone store,my job is not to claim anything,this is the real facts,most xperia's have lot of problems and their quality in any aspect can't compete with Samsung,Apple or Nokia

cyber, 26 Feb 2013sorry,my opinion for display is only for xperia z,i aint have that tablet,at this time previos... morewhat do you want to prove here.
everybody knows that Sony puts the best build quality in every device it produces and no one here pays attention to those bullsh*ts you claimed so far.
this is the first time i hear that Sony has lots of problems with its phones and it shows that what you claim is just a none sense.

Anonymous, 26 Feb 2013I am asking about the tablet not phone... I have heard no one complaining about the tablet's v... moresorry,my opinion for display is only for xperia z,i aint have that tablet,at this time previos sony tablets are not seliing in phone stores in Bulgaria

cyber, 26 Feb 2013test units is already in the stores,im not impresed from display of xperia zThen you need to get your eyes checked. You seriously need glasses or a new set of eyes.