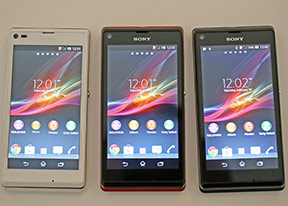 roy, 02 Jun 2013Does this phone has bravia engine 2??No there is nothing like bravia engine 2 bcse. It is a low end phone frm sony according to sony.

Anonymous, 31 May 2013no it doesn't that's the sad part :(the sad part is you dont have a sony bravia

Got it 3 days ago for ~EUR 286,- (sim free). An yesterday my daughter got it as names day present. :)
Looks grate and works great. Really good camera and no delays (freezing or whatever) in gaming so far.
Really good value for price.
And my wife's (Using iPhone 5) reaction was - "I want such phone too!" :)
Only drawback - it only has 4 GB of memory (don't know why as everywhere in press they promised 8 Gb). Not a big problem, as for EUR 30 I can get extra 32GB of MicroSD.

Does this phone has bravia engine 2??

I am looking very much forward to a review of this, and for a supposedly 'entry' level phone, this is scoring quite high on benchmarks! 10600 on Antutu, 4430 on Quadrant, 60FPS Neomark. It matches the HTC One S, and is not far off the HTC One X in performance!

IS xperia l is better than xperia p??

Hi,
I want to test its's camera though. I have doubts about it. I bought a Xperia Ion two weeks earlier. The 12.1 mp camera on my phone is not satisfactory as compared to S3's 8.0 mp camera. The performance is pretty good but I'm unable to run multiples app at the same time. Thanks to One Browser which has a multi-tab feature which allows me to surf through all the social

why sony xperia L have not bravia engine? Is this shortcoming for this model of sony? thanks

Aashish, 22 Mar 2013This phone is nothing compared to the lumia 920You are right, coz only Lumia 920 does this,
http://www.youtube.com/watch?v=pzt4SPAkuSA

More seriously, Nokia still have that same old pathetic build quality, i dont know what they are thinking. A phone for true losers.

Aashish, 22 Mar 2013This phone is nothing compared to the lumia 920Windows will end sept.2014. Microsoft will no longer have partnership wid nokia.. Elop is a past employee of microsoft.. Lol