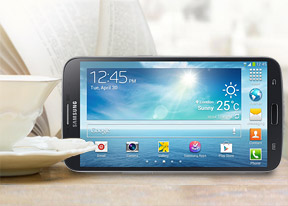 AnonD-148275, 23 May 2013ANONYMOUS WROTE: I dont care what others say, Samsung Amoled screen looks really ugly. What I ... moreTo those that complain about the size.
SHUT UP.

GMega is much much easy to hold in the hand, or in the bag than iPad Mini. Can put it even in a big pocket.
Even have phone function added. Plus much better screen than iPad Mini. And better components.
I don't care how do call it- tablet, phone or phablet- and it F doesn't matter at all.
This is great small tablet , with even phone capability.(if you don't want to carry sometimes two devices)

The phone is good as a low-cost Note, but it would've made a lot more sense with a screen an inch smaller. It's almost unnatural to hold this phone in one hand. Good as a mini tablet (1.7 ghz Krait>1.2 ghz quad core non-Krait).

MY RESPONSE: Maybe they'd tell you if you didn't begin your criticism with that you don't care what they say.

I'll pause for a moment and let that sink in.

A Samsung super-AMOLED screen has blacker blacks, whiter whites, and more brilliant colors that most any other smartphone screen... especially that of an iPhone! I've also laid them side-by-side with Motorola and HTC phones and, trust me, Samsung's is better. If you didn't think so, it could have been because either the brightness was turned-up too high, or the phone suffered from what I describe in the next paragraph: Too low pixel density.

The mistake Samsung makes is not increasing the resolution as the screen size increases. This MEGA's 6.3-inch screen has the same 1280x720 resolution as the smaller-screened Note II, and even some of its even-smaller-screened other devices. The result is that the larger-screened phone has a lower pixels-per-inch rating (aka, "pixel density"), and so if the screen doesn't boast Samsung's ""Super-AMOLED-Plus" (with emphasis on the "plus" part) so that there's some pixel interpolation and smoothing on the larger screens (like we saw on the Samsung Infuse 4G, for example), then the pixel density isn't enough to keep the image from sometimes becoming a little either (or both of) generally grainy, or exhibiting jaggies on curved/arched parts of the image.

I'll bet dollars to donuts that if you found any Samsung AMOLED screen to be objectionable, then it was because it was either or both of turned-up to bright (which, because it's capable of such brightness, can be, I admit, jarring) and/or had too low a pixel density.

Any pixel density that's very much less than around 220 (to maybe, at worst, 210) pixels per inch starts to become a tiny bit either or both of grainy or with jaggies -- especially if very bright -- to persons with exceptionally good vision. Some of these oversized Samsung screens have pixel densities down in the 203 to 207 pixels per inch range; and so if that's what you saw, and if the phone didn't have "Super AMOLED Plus" technology (with emphasis on "plus") to do some internal fiddling with the pixels to kinda' smooth things out, and if you have exceptionally good eyesight, then, yes, I suppose you could have been unimpressed with the screen.

This MEGA 6.3 screen is big enough, in my opinion, to have 1080p (1920x1080) resolution. In fact, before I heard of this MEGA 6.3, I was telling someone just the other night that what Samsung needs to do is stop fooling around with 5-point-something-inch screens on such as the Note and Note II (and the upcoming Note III); and just freakin' -GO- for a full-blown, unapolgetic phablet to really and truly bridge the gap between phones and 7-inch true tablets.

I prescribed, though, a 6-inch (not 6.3-inch) phone with 1920x1080 screen resolution, a something-faster-than-1.5GHz dual (not quad, but dual) core CPU, and 2GB of RAM. Such as that would actually be a pretty darned nice phone.

Most phones have 1GB of RAM, and, honestly, at LEAST 1.5GB (as the MEGA 6.3 has), but better 2GB (which the Note II) has is really needed. Whatever infirmities an only dual-core processor might impose would be more than adequately compensated for by a whopping 2GB of RAM. With today's computers, regardless of OS, more RAM has long been a good over-the-counter-quality (as opposed to "prescription quality") remedy -- at least to a point -- for an otherwise only-adequately-powered (or, worse, underpowered) CPU. If the MEGA 6.3 had 2GB of RAM (just a half-gig more than it now has), no one would ever think that its 1.7GHz, dual-core processor is too slow. Even only that extra half-gig that it has is likely enough to compensate for the processor not being quad-core.

And, of course, Samsung did it that way because an extra half-gig of RAM is considerably less expensive than a quad-core processor and the more costly chipset needed to support it! Samsung's trying to keep these darned things below the $1,000 mark!

What you think of inventing a phone in which people needs wheelbarrow to carry, or what you think of a phone 17inch wide screen one time, I swear is sweet for you hahahahaha, IOS on one single Device can still beet this ugly Android.

it's just too big for me but I have to say, it's sexy! hehe

btw, is this the final retail model cause I think I saw several lags in the video hands on while he's demonstrating it?

Not impresed at all

it is perfectly beautiful if the note 8.0 has the same design to the Mega 6.3.

AnonD-147044, 19 May 2013Looks like Samsung only made this phone to see how many people would buy a phone JUST for its ... moreI think Samsung is targetting this new Galaxy Mega 6.3 for Gamer.

With it low price, it can be easily attract Nitendo GBA, Sony PS Vista users to switch side using only 1 device when go mobility.

And the lame Qualcomm CPU/GPU still sufficient for the 800p HD resolution. Only Full-HD 1080p screen require higher CPU/GPU core and speed, not to say they require more battery power too.

Galaxy Note 8.0 and 10.1 both 800p too and they're still sharp and good enough with the longer viweing distance.

Looks like Samsung only made this phone to see how many people would buy a phone JUST for its size.

Because honestly, for THAT size the specs are ridiculous: Lame GPU and CPU and only 1280*800 screen resolution.

I saw many lags on this phone

same model than sIV usless device instead of that by a tablet!!!!!!!

I like to watch movies on the go. I watch youtube a lot also. For the right price maybe i find some interest on it.

Wait for the next Note.