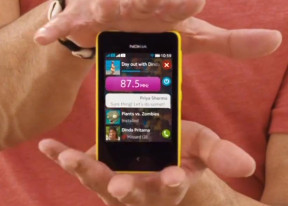 lolza, 28 Jun 2013fast ? this peice of junk asha is fast ? as for cheap off contract : vodafone smart 3 is 90-10... moreCheap Androids are a nightmare. This is a fun phone for people with better things to do than trying to make a cheap Android work for them. Also, this looks 10 times better, Android interface is designed by blind robots.

Will the current whatsapp S40 app work on this phone ?

nekko, 28 Jun 2013If you would please enlighten me what is the stock file management used on galaxy s4/xperia z/... moreso what if it comes from the play store? at least there's a sotre as opposed to the ..cough.. wp store LOL

Anonymous, 28 Jun 2013The operative words there that you obviously missed are "non-subsidized" and "f... morefast ? this peice of junk asha is fast ? as for cheap off contract : vodafone smart 3 is 90-100 bucks sim free. and then there's alcatel 918, and of course others that i cant be bothered to look for. and not to mention used phones that wipe the floor wit hasha phones like : desire , desire x, lg l5 less that 100 bucks and it's newish, and has jelly bean, just like the vodafone smart and alcatel 918.

Ahstpk, 28 Jun 2013Well, its blazing fast...belive me its fast..because there is no customization..No software...... moreNo customization? You can customize the wallpaper, ringtones, and download new colour themes. No apps? You get 40 EA games apps for free in every purchase. So what is it that you are saying again?

yeah, 27 Jun 2013not so long ago, Nokia's investors notified the CEO to rethink Nokia's strategy since this Win... moreAs you all know Elop is the Trojan Horse from Microsoft to destroy Nokia to ashes.

riyaz madappally, 28 Jun 2013brother I think you didnt used or didnt saw the samsung android and bada phones..still you wer... moreIf you would please enlighten me what is the stock file management used on galaxy s4/xperia z/nexus 4? You know the one that comes straight as you open from the box. Not those on Google Play. Please I need to learn this as you said I have fallen behind

nekko, 28 Jun 2013Nokia is right calling them ashas smartphone. They all have proper file management. Even from ... morebrother I think you didnt used or didnt saw the samsung android and bada phones..still you were in that old nokia era

Well, its blazing fast...belive me its fast..because there is no customization..No software...no games...No apps...its can not play videos bacause its low end it can not capture anything You can not install or modify anything because its low end....!! but colours and design is awsome..!

Nokia is right calling them ashas smartphone. They all have proper file management. Even from the days of the s40. Android is smart but without a standard file manager you are stranded in shame. Stock Android phone depends heavily on pc until a file manager app is installed. Don't get me started on iPhone. File management is one of the most important features of a smartphone. And Asha wonderfully met that requirement.

I appreciate the New concept,
But this one is more like copied same as Modu T, which was launched years back..
Almost same UI n support, same gestures.
If both compared, I would rather prefer Modu T coz of its customizable jackets.
Loved it

Waiting for it, my next phone.... Good job Nokia