Two new BlackBerry smartphones are coming right next month. The candybar duo Bold 9650 and Pearl 3G leaves the old-fashioned trackball in favor of the fancy trackpad. 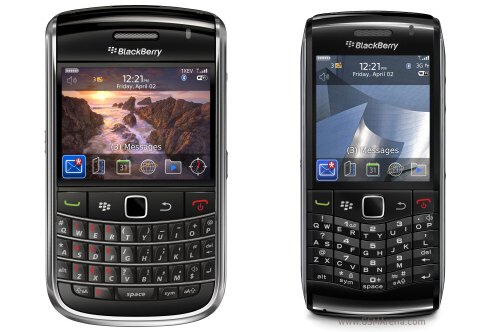 The Pearl 3G supports the latest Wi-Fi 802.11b/g/n standard, while the Bold 9650 relies on the previous b/g one. Still, the new Bold will be released in both GSM and CDMA versions, but the Pearl 3G won't be available for the CDMA users.

BlackBerry Bold 9650 (in CDMA obviously) will be available from Sprint USA starting next month. The Pearl 3G will hit Canada through Bell, TELUS and Rogers most probably the same time. Other market availability and pricing are yet to be announced.

As of now, RIM still don't have any official press info on both devices. Looking forward to it, we hope it's not some leak.

There difference between the bold 9700 and the 9650 is it has twice the RAM it comes with 512mb so that more apps can be loaded on to it and its smoother (probably perfect for the new OS 6) also it has open GL 3D technology just like the tour 2 has s...

Hello Friends Well, it seems that the super simple minded people that come into my store looking for the blackberry touch screen phone have some how made it to one of my favorite websites on the internet. Since you are not in my store, and you a...

Yawn, Boring! Can you imagine a world where you just keep replicating yourself. Every where you turn it's you, but in another location.