Rugged Motorola DEFY hits it off in Germany, yours for 350 euro

The ruggedized Eclair-serving Motorola DEFY has just made it to the market. The phone was said to head for the stores this month and, as promised, it has just started selling in Germany. The thing is priced at 350 euro.

The Motorola DEFY saw daylight for the first time over a month ago. And back then our attention was caught by its IP67 specifications, which guarantee protection against dust, water and accidental drops. And the Gorilla Glass covering the 3.7-inch WVGA capacitive touchscreen keeps scratches away. 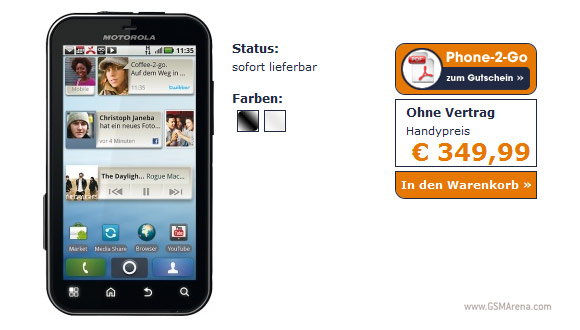 As for the other noteworthy Motorola DEFY features, those include a promising (though not Snapdragon-zippy) 800MHz processor, 512 MB RAM, 2 GB of onboard storage and the preinstalled Swype software for fast text entry (unlike the MILESTONE, the DEFY lacks a hardware QWERTY keyboard).

The DEFY runs the Android 2.1 a.k.a. Eclair with the MOTOBLUR UI on top of it. The smartphone also packs a 5MP autofocus snapper with LED flash, a built-in GPS receiver and support for HSPA, Wi-Fi (with DLNA) and Bluetooth.

The Motorola DEFY is coming in two color versions - black and white on black, and can already be found at The Phone House Germany stores across the country. You can get it for as low as 1 euro (on contract). The SIM-free device will cost you 350 euro, which sounds quite fair considering the impressive feature pack.

2,4 inch display, 3.15 MP camera, smaller but heavier, 16GB max Storage, 120 MB internal Storage, no IP67, no Gorilla-glass, Symbian, and probably one hell of an outdated CPU/GPU + no DLNA... A Qwerty keyboard and the longer standby times do no...

When will this ammunition will come to indonesia,, Soon I hope