Samsung and Apple held 52% of the smartphone market in Q4

Gartner, the popular analyst company has released its quarterly report, which shows that Samsung and Apple continue their domination in the smartphone market, while the third place is up for grabs. 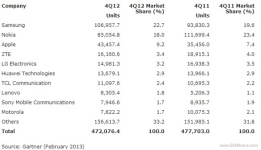 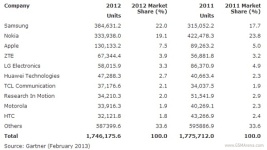 Sales report of Q4 and 2012 respectively

The top two manufacturers have a combined market share of 52% with Samsung accounting for 64.5 million shipments, while Apple managed to sell 43.5 million units. The South Koreans saw an increase of 85.3% in their sales, while at the same time Apple's sales were up by 22.6% from the last year.

Android extended its lead over other operating systems by adding 145 million units, out of which Samsung accounted for 42.5%. Meanwhile, Apple's iOS market share dropped from 23.6% to 20.9% in the last quarter, but remains ahead of other rivals. 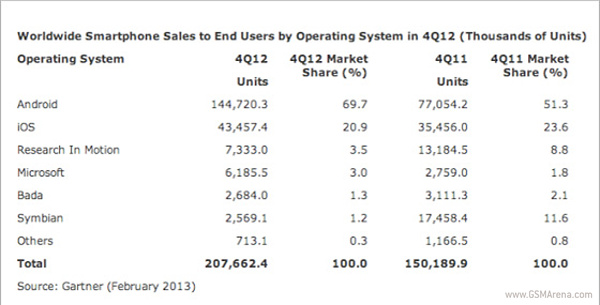 According to the Gartner's report, the third place in the smartphone game is currently held by Huawei, who managed to sell more than 27 million handsets in 2012. However, the Chinese company only holds the spot by the skin of its teeth and the competition for it remains fierce.

Iphone gadgets are crap & takes u ages to get music on it. I love android cause u copy & paste your file & folders with ease

"Forcing customers indirectly" means: MASS MANIPULATION. If you don't understand that, maybe you need help. What mass manipulation is? I think we all know that a president, not very loved by the mass, always gets re-elected. You don't like ...

I'm glad to see LG is still in the game. I have the Optimus 4x hd and never been more happy with a phone. Come on LG keep it up!