With MediaTek and Qualcomm pumping mid-range 5G chipsets, Samsung is keen not to be left behind and delivered its most affordable 5G chipset - Exynos 880. It's hardly a shocking development because vivo already announced a phone powered by it - the Y70s - but it's still nice to get the details. 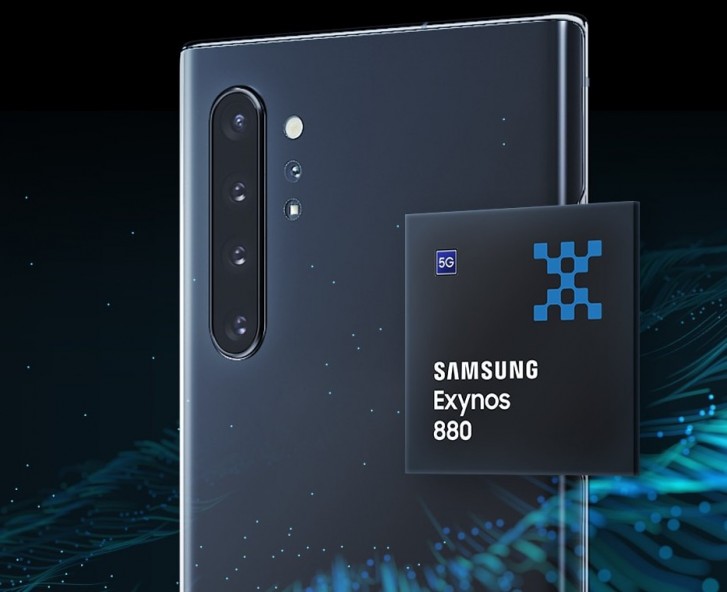 The SoC is built on the 8nm FinFET manufacturing process and employs an octa-core CPU with two Cortex-A77 cores ticking at 2GHz and six smaller Cortex-A55 cores running at 1.8GHz. The GPU on board is the Mali-G76 MP5.

The ISP caps at 64MP for a single camera setups and dual implementations can go up to 20MP + 20MP. Ultra HD recordings at 30fps are the maximum allowed and the tall FHD+ resolution (2520 x 1080px) is all you can squeeze out of the SoC. Samsung's specs sheet reads LPDRR4X memory and storage support of up to UFS 2.1 and eMMC 5.1.

The built in modem supports sub-6GHz 5G networks with theoretical download speed of up to 2.55Gbps and 1.28Gbps upload speeds. mmWave is not on the menu for this one, though.

The chipset has clearly already entered mass production since the vivo Y70s that will be its pioneer is launching on June 1. We will probably see more phones follow in its footsteps in the coming months.

Samsung should've used Exynos 880 on more of their smartphones. Like A52 could've gotten exynos 880 instead of snapdragon 720G.

Exynos 880 is needed for the lower-price segment. Exynos 880 will become the 5G equivalent of Exynos 9611, so widely used in lower-priced Samsung phones, M series and A series.