The Samsung Galaxy Note 3 is leaving its predecessors in the dust – it sold 5 million units in the first month of availability and now a month later the number of units shipped has reached 10 million. 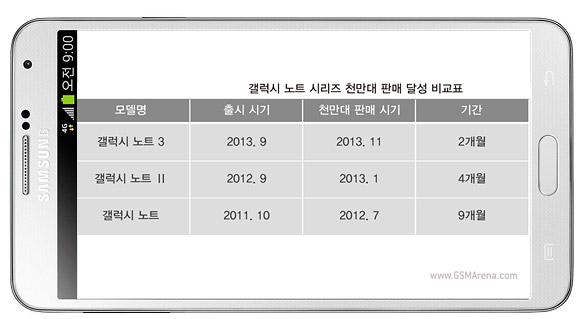 Note that the number of sales is probably lower than the number of shipments as those are supplies sent to retailers and carriers. Still, the numbers are impressive – the original Galaxy Note took 9 months to reach 10 million units shipped and the Note II took 4 months. The Galaxy S4 took less than a month to reach that milestone , but that one was a far more mainstream product.

The Samsung Galaxy Note 3 was launched simultaneously in 58 countries on September 25. According to Samsung, it drew in customers with its large-screen multitasking and fast LTE in the west and the convenience of text input with the S Pen in Asia.

Funny Samsung should mention LTE, the Exynos-powered Galaxy Note 3 does not have it. This raises the question of how many of those 10 million units does the N9000 (the Exynos 5 version) account for versus the N9005 (the Snapdragon 800 version).

I guess the reality of things is really eating a lot of you trolls up...So you all have to come to Samsung/Android pages "depending on the type of troll" and bash, lie, and be jealous.

You nailed it again, Samsung! Keep the good work :)

i'm using iphone but only change my iphone once in 2 years. i just ignore all iphone with s, 3gs, 4s, 5s because for me it is not worth it to change iphone every year.nowadays im stuck with my iphone 5. waiting for iphone 6 than only i will change my...