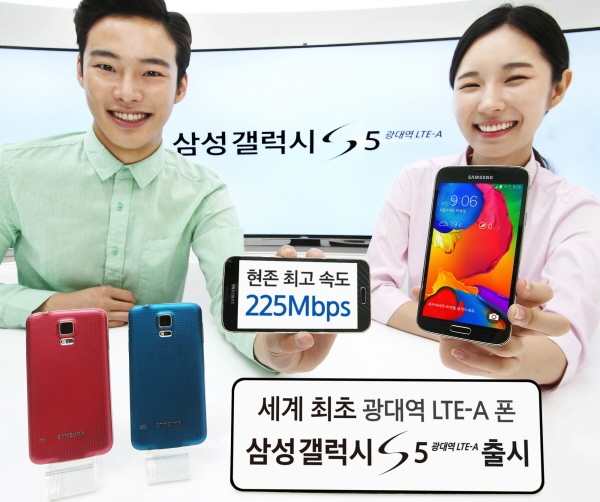 The main feature here is obviously the LTE Advanced or LTE-A connectivity, which at 255Mbps is nearly three times faster than standard LTE. LTE-A is currently only available in a handful of countries.

The other major feature is the new Snapdragon 805 SoC, which makes its debut on this phone. It features four Krait 450 CPU cores clocked at 2.5GHz along with the Adreno 420 GPU. The phone also has 3GB of RAM.

Other than that, it is mostly similar to the standard Galaxy S5, with 16 megapixel rear camera, 2 megapixel front camera, heart rate sensor, dust and water resistant body, 2800mAh battery and Android 4.4 KitKat.

The Galaxy S5 LTE-A will be priced at 940,500 South Korean Won ($919) and will be initially available on SKT and eventually KT and LGU+. The phone will be available in Charcoal Black, Shimmering White, Electric Blue, Copper Gold, Sweet Pink, along with a special Glam Red version for SKT.

Oh yah? May be in Mars that is LOL Let me educate you a bit, fellow: There is nothing called lagging as an absolute value. In order to measure lagging of some system you need to compare it to others. And you actually hit Android in its killing ...

I don't quite understand why this phone isn't launched in Europe or elsewhere outside Korea!

Android hardly has a very noticeable amount of lag. And lag is a reality thing not and Android thing. Wp and IOS have some too. And many people are familiar with the crashes of IOS