You thought the Samsung Wave 2 was the successor to the Wave, didn't you? Us too - but it's not, the Samsung S8530 Wave II is the real deal. The screen has grown to 3.7-inches and all the great features have been preserved. And we thought only Nokia's naming scheme was a mess.

The Samsung S8500 Wave was an impressive phone - the first SuperAMOLED we had seen had quite an impression on us and the other features were very high too. The next two Bada phones were aiming for a wider market with mid-range features, so understandably they didn't live up to their predecessor.

The Samsung S8530 Wave II brings Bada OS back to the high-end - a 3.7" screen WVGA screen, but Samsung made the switch to "Super Clear LCD".

That nicely corroborates with the rumors we've been hearing lately of SuperAMOLED display shortages, which were supposed to ultimately lead to the end of manufacturing of the original Wave. Samsung prefers to keep their SuperAMOLED manufacturing lines busy with phones such as their Galaxy S and their upcoming WP7-based Samsung Omnia 7.

The original Wave was was among the first phones with Bluetooth 3.0 and Wi-Fi b/g/n. The Samsung S8530 Wave II has those too. It's also got the same 1GHz CPU, 5MP camera with LED flash and 720p video capture.

The guys over at the German website teltarif.de already had the chance to spend some time with the Samsung S8530 Wave II and compare it to the original Wave.

It turns out that the Wave II runs the Bada OS v1.2, which adds a few small upgrades, including Over-the-Air updates support and a Swype-like text-input method by Nuance called T9 Trace. By the way, a leaked Bada 1.2 firmware shows that the new features (plus improved performance) are already on their way to the owners of the original Wave. 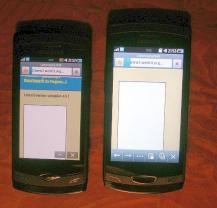 That’s what’s different on the inside. On the outside, there's the redesigned center key. And as you would guess, the larger screen has lead to a larger body – the Wave II measures 123.9 x 59.8 x 11.8mm and weighs good 135 grams.

Not bad for an all-metal smartphone with a 3.7-inch touchscreen on board. Then again, those measures are an almost exact match for the HTC Desire.

The Samsung S8530 Wave II will be available in Europe this November (with a confirmed German price of 430 euro or 590 US dollars).

i was wondering if the samsung wave 2 still avaliable to be purchased as i have looked everywhere for one but everyone i have contacted have said there is no stock left and the phone is not being made anymore?

how to change the language to send new sms? I did it before but forgot how to get the correct key to do it.

can anyone tell how many txt messages can store in the inbox and about the battery life of samsung s8530 wave II.... pls....... thanks in advance