Samsung announces the Exynos 7 Octa, is the old Exynos 5433

Samsung announced an interesting move today by renaming its Exynos 5433 chipset to the Exynos 7 Octa. The chipset is powering one of the versions of the Galaxy Note 4 and was previously known as the Exynos 5 Octa (5433). Apparently Samsung thought its first 64-bit chip deserved better treatment than that. 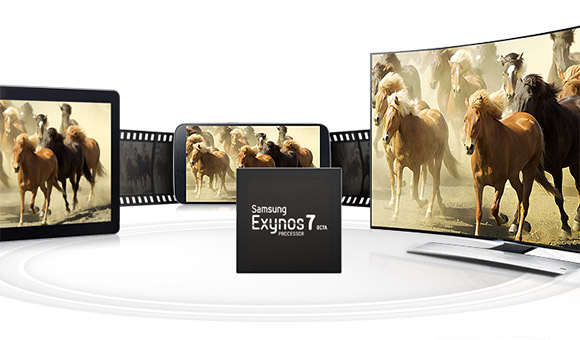 With the Exynos 7 Octa, the company is going to have a much better time with customers differentiating the more powerful Galaxy Note 4 from the Galaxy Alpha, which also packs an Exynos 5 Octa (5430). However, it's a much less powerful one with a quad-core 1.8 GHz Cortex-A15 and quad-core 1.3 GHz Cortex-A7 CPU.

Give how well the Snapdragon S805 Galaxy Note 4 fared in our review, we are really eager to see what the Exynos units will do.

You obviously have no idea what you're even talking about.

mali is definitly strong but not well optimized like adrino. coz, snapdragon uses its quad cores and adrino which r stands well about a hardwere specification. u can see every app in play store.......r basicaly optimized for any types of snapdragon v...