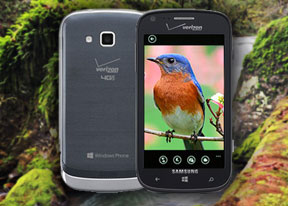 The Photos (previously known as Pictures) hub is also pretty much the same as we left it in Windows phone 7.5.

And of course, the point of hubs is that they are the go-to place to do things, instead of apps. New functionality allows apps to integrate into the Photos hub, so for example, a photo effects app can make its options available right in the hub. Developers need to enable that into apps however.

Sharing options include messaging, email, Facebook or the cloud-based SkyDrive.

The media players reside together in the Music & Videos hub, which now bears the Xbox logo or the last played media thumbnail. When you start it, it shows the History, which gives you quick access to the last two things played, or you can go to the full menu and start the music or video player, listen/watch podcasts (both audio and video podcasts are supported) or go to the Marketplace.

There is no FM radio though.

The video player is integrated into the Music + Videos hub. It has a very simple interface - you have fast forward and rewind controls, a time scroll and a video size button that toggles full-screen viewing.

The video player in Windows Phone 8 has greatly improved codec support since our last encounter. Now it does recognize pretty much every Xvid, DivX and MP4 videos up to 1080p resolution. The few things it won't play are MKV files and videos using AC3 audio codec. While this is not perfect, it's much better than before.

There is no subtitle support just yet.

Since Windows Phone 8 is Zune independent, you can easily upload videos from your computer via the USB mass storage mode.

The Samsung Ativ Odyssey audio output is hardly the loudest around, but the quality of the sound produced by the smartphone is reasonably good. We've seen better out there, but not too-demanding audiophiles should be fine with this performance.

The only problems we spotted were the above average intermodulation distortion in both tested scenarios and the higher than average stereo crosstalk when you connect a pair of headphones. Other than that the readings were great, which combined with the average volume levels adds up to a decent overall score. 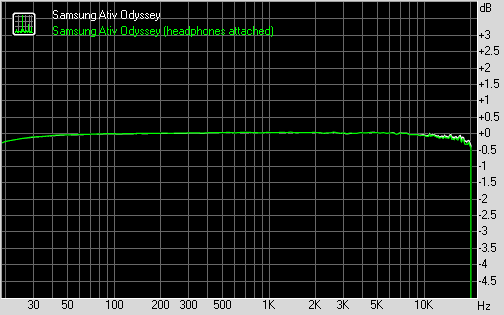