The B5310 CorbyPRO's file browser can display the files and folders on the phone memory or the memory card, and both at once.

There are folders for different types of files (images, video, sounds) to let the handset sort the memory contents.

However, you are not forced to follow this structure - you can place your files wherever you want and the phone will have no problems handling them.

You can copy or move files - both one by one or in bulk, and you can create and delete new folders (except for the root folders, like Images, Sounds and so on).

Files can also be sent via Bluetooth, one by one again, or in bulk. Throughout the whole file manager you can pick files you would like to lock to prevent accidental deletion.

The memory card initiatialization is surprisingly fast: regardless of the capacity, the B5310 CorbyPRO recognizes a memory card in 10-15 seconds. The phone comfortably handles a 16GB microSD card with thousands of different files. Working with the files on the memory card once it's initialized is fast enough to satisfy most users; however, speed does drop when the card starts filling up.

Unlike some Samsung phones, the B5310 CorbyPRO has only one picture gallery. However, this isn’t an issue since the gallery it does have is fully functional. You'll most likely not miss the Photo browser despite its eye-catching qualities.

The B5310 CorbyPRO gallery is an inherent part of the file manager and launching it is as simple as opening any folder that contains images.

Once you open a picture to view, you can sweep your fingers across the screen to see the next image without having to return to the image list. Browsing the images is really fast and responsive with no lag.

Zooming in is easy enough though not as responsive as we would have liked it to be. You have the one-finger zooming too and it seems to work better here than on the Samsung Lindy.

To zoom in quickly from thumbnail size to 100% you can just double tap on the screen. If you repeat, the image will go back to thumbnail size.

Browsing images in landscape mode is also available. Thanks to the integrated accelerometer, you can switch to landscape view by tilting the phone or sliding out the QWERTY keyboard.

The music player of the Samsung B5310 is almost exactly the same as in the original Corby and hasn't been altered much from the M8800 Pixon.

It allows filtering tracks by author, album, and genre. Automatic playlists (recently added, most played etc.) are also generated and can subsequently be used as filters. If that doesn't seem enough, you can create your own custom playlists. The music player can naturally be minimized to play in the background.

The music player also has a dedicated homescreen widget, allowing quick access to the full version of the application with only a single tap. You can also start, stop and skip tracks straight from the home screen if you prefer.

Last, but certainly not least, the player is nicely touch-optimized to include fast forward and rewind, just like on the S5600. This adds up to an excellent music application that can fully replace your portable MP3 player.

And one more thing - let's not forget that the CorbyPRO also packs a standard 3.5mm audio jack so you can plug in your favorite headphones straight away. No adaptors needed.

The Samsung B5310 CorbyPRO features an FM radio with RDS. The CorbyPRO radio app offers intuitive controls and has the Find Music recognition service implemented, which works much like Sony Ericsson's TrackID.

The radio app is in the Applications menu but the Radio widget on the home screen gives you more immediate access. Tapping on it brings up the radio or you could just use the widget's controls to start/stop the radio or change the station. It can only skip between saved stations though, and if you want to search you'll have to do it in the actual app.

Speaking of stations, you can save stations but they are labeled just by their frequency and you can't rename them. There's a separate list for your favorite stations though.

The video player is OK

The video player has a simple interface with not too many features. All the basics are covered though, and that should really be enough as the screen size doesn't really imply first rate portable video watching.

The video player of Samsung B5310 CorbyPRO

The player supports MP4 videos but we only managed to get QVGA samples running. VGA resolution videos we tried were a no go.

The audio output of the Samsung B5310 CorbyPRO is pretty good generally, the handset scored excellently on most parts of our traditional test.

The frequency response is spot-on with very minor deviations at either end of the audible range. The stereo crosstalk is excellent and so are the noise levels and the dynamic range readings.

The slightly high distortion levels are the only thing that separates the CorbyPRO audio output from perfection. They aren't too disturbing but we are still below average and so we have to point them out. 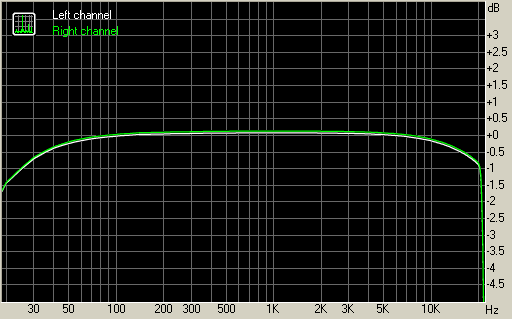