Today at an event, held in Milan, Samsung announced two new members of the Corby family – Samsung B5310 CorbyPRO and Samsung B3210 CorbyTXT. The two new handsets share the ideology of their S3650 sibling (you can check out its review here), sporting a distinctly youthful design and mid-range functionality but one can hardly accuse them of lacking character. 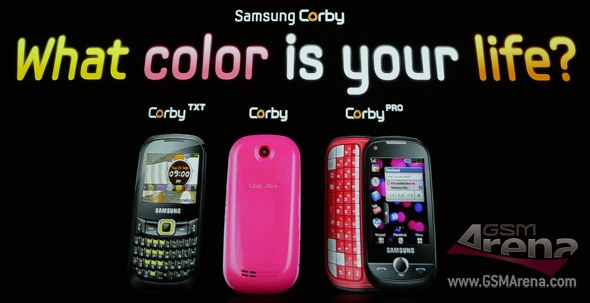 For one, both new Corbys pack QWERTY keyboards, that should make them extremely appealing to teenage messaging addicts. The Samsung B3210 CorbyTXT is a slim candybar handset, while the B5310 CorbyPRO is a neat side-slider.

Unlike its two siblings the Samsung B3210 CorbyTXT doesn’t sport touchscreen functionality. Instead it relies on a slim (12.9 mm) profile and lightweight body to win some fans. There is also a microSD card slot, Bluetooth and USB on board, as well as FM radio and a 2 megapixel camera. The display on that one measures 2.2” in diagonal and sports QCIF resolution.

A pretty cool feature of the quad-band GSM (no 3G, sorry) Samsung B3210 CorbyTXT are its exchangeable back panels (called Fashion Jackets), much like the ones on the Samsung S3650 Corby. The other value added features that Samsung has quoted for the CorbyTXT include Cartoon UI.

As we had the pleasure of attending the Corby family announcement event, we of course have some live shots of Samsung B3210 CorbyTXT - by the way, it's pronounced as Corby Text, though spelled funny.

Samsung CorbyTXT is thin and has a full QWERTY but is not a business phone, it's a device for the young

The Samsung B3210 CorbyTXT will be launched in Europe by the end of September with other markets following soon. Its pricing is yet unknown but we are guessing it should be a pretty affordable handset.

The touch-operated QWERTY side-slider Samsung B5310 CorbyPRO is the flagship of the Corby lineup. With features like quad-band GSM, dual band UMTS with 7.2 Mbps HSDPA and Wi-Fi and GPS it easily outshines its relatives.

The 2.8” 16M color QVGA resistive touchscreen display is responsible for the Cartoon UI operation, while a 3 megapixel fixed focus camera is in charge of the photography. The family trademark exchangeable battery covers are also available with the CorbyPRO. FM radio with RDS, Bluetooth, USB and a 3.5mm standard audio jack complete the highlights of the device.

The Samsung CorbyPRO expands the Corby family to a higher tier offering a full touchscreen experience along with Wi-Fi and GPS but retaining the expressive youthful complexion.

Samsung CorbyPRO is seriously geared for texting (and not only!)

Samsung B5310 CorbyPRO will start shipping in November. Once again, Europe will be the first market to get it, while the others will have to wait a little bit longer.