Samsung B7610 Louvre leaks - QWERTY slider with a big screen

The new phone from Samsung that just leaked will appeal to business people and heavy texters alike. It's called the Samsung B7610 Louvre and it's a side-slider with a full QWERTY and a 3.5" AMOLED touchscreen that runs the Window Mobile OS.

The Samsung B7610 runs the TouchWiz interface that Samsung use to cover up WinMo 6.1 OS. It will also be upgradeable to Windows Mobile 6.5 when it comes out in September.

The display sports a sweet 480 x 800 pixels resolution and can theoretically display up to 16M colors. Due to the restrictions of the Windows Mobile 6.1 OS though, the Samsung B7610 will only be able to utilize 65K colors of those colors. Nonetheless that should make for pretty good picture quality as far as our experience shows. 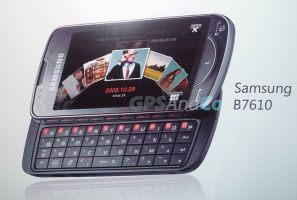 The camera on the device is a 5MP one with image stabilization and autofocus but doesn't have flash of any kind. There'd be plenty of space to store your photos too - the Samsung B7610 Louvre comes with 1GB of internal memory and support for microSD cards of up to 32GB (when those eventually became availble).

As far as connectivity goes the Samsung B7610 Louvre is a real champ - quad-band GSM, HSDPA running at up to 7.2 Mbps, Wi-Fi 802.11b/g and Bluetooth 2.0, miniUSB as well as an FM radio with RDS. There's also GPS with A-GPS support but we don't know if it'll come with any kind of navigation software preinstalled. In any case, Samsung Navigator (rebranded Route66 software) will be a big plus in the spec list.

The Samsung B7610 Louvre should be available in France in July for Orange and SFR. The price is rumored to be somewhere along the lines of 350 euro (500 US dollars).

how much is it in ireland ??