Samsung B7722 review: Double the action

The B7722 file browser can display the files and folders in the phone memory or the memory card, and both at once.

There are designated folders for different types of files (images, video, sounds). You are not forced to follow this structure though – you can place your files wherever you want and the phone will have no problems locating them.

The file browser is quite efficient

You can copy or move files – both one by one or in bulk, and you can create and delete new folders (except the root folders, like Images, Sounds and so on).

Files can also be sent via Bluetooth, one by one again, or in bulk. Throughout the whole file manager you can pick files you would like to lock to prevent accidental deletion.

The Samsung B7722 gallery is an inherent part of the file manager and launching it is as simple as opening any folder that contains images.

Once you open a picture to view, you can sweep your fingers across the screen to see the next image without having to return to the image list. Browsing the images is really fast and responsive but zooming can take a second on 5MP images.

You have the one-finger zoom but it kicks in after you spend a couple of seconds touching the image with your thumb. Once it’s activated, it starts zooming in before you’ve even moved your finger, which is annoying if you’re trying to zoom out.

Browsing images in landscape mode is also available and the rotation is automatic thanks to the built-in accelerometer.

The gallery can do slideshows too, but they are not customizable and scroll through a bit too fast.

Along with the microSD card slot, the B7722 music functionality is complemented by the great music player usually found on Samsung devices. What’s missing, though, is the 3.5mm audio jack. Well, you get a microUSB-to-3.5mm adapter which is better than nothing.

The album art takes the entire top half of the music player screen with the basic controls underneath. Tapping on the album art will display additional overlay controls – the progress indicator, a button to change the repeat mode, a shuffle button and an equalizer button.

The music player allows filtering tracks by author, album, and genre. Automatic playlists (recently added, most played etc.) are also generated and can subsequently be used as filters. If that doesn't seem enough, you can create your own custom playlists.

The music player can naturally be minimized to play in the background.

The music player is up to scratch

The Samsung B7722 equalizer offers the standard presets like pop, jazz, classic, as well as widening, dynamic and surround effects. You can’t create custom equalizers, but with such a wide selection of presets you really won’t need to.

The Find music service is a tap away and can be used to identify externally played music by sampling about 10 seconds from it and looking it up on web servers.

The Samsung B7722 isn't the loudest handset we have put through our audio quality test but it wasn't too quiet either. Plus its output is decently clean so the overall impression is rather positive.

The frequency response is good enough with the deviation never exceeding 0.86dD in the audible range. The noise level and stereo crosstalk readings are pretty good and neither the distortion levels nor the dynamic range is anything to be concerned about. 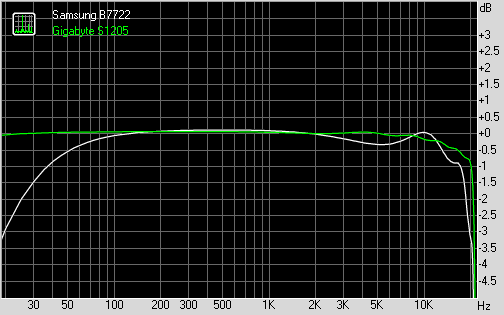 Radio with a built-in recorder

The Samsung B7722 features an FM radio with RDS. The radio app works with Find Music too, which is great if you missed the name of the song playing on the radio.

There's an option to record radio broadcasts as well, which can be a cheap way to get individual tracks or whole song sets off the radio.

FM broadcast recordings are in the MP3 format, 192Kbps 32KHz for High quality (that results in about a megabyte for each recorded minute). You can also pause the recording if you want to skip the commercials for example.

There’s the radio widget too, which gives you control over the radio from the homescreen.

The video player could be better

The video player has a simple interface with not too many features. All the basic are covered though.

The video player of Samsung B7722

The player supports MP4 videos (so, no DivX and such) but we only managed to get QVGA samples running. VGA videos were a no go, even CIF (352 x 288 pixels) failed to play.