Samsung is releasing the occasional flip smartphone, but those are niche products with limited availability and appeal. A Samsung official revealed that the company has a plant to leverage its bendable display technology to create foldable phones.

The official did not provide any more info though if a foldable, flip phone like form factor can be used to provide a large screen in a compact body. While that may sound futuristic, we may see it as early as next year. 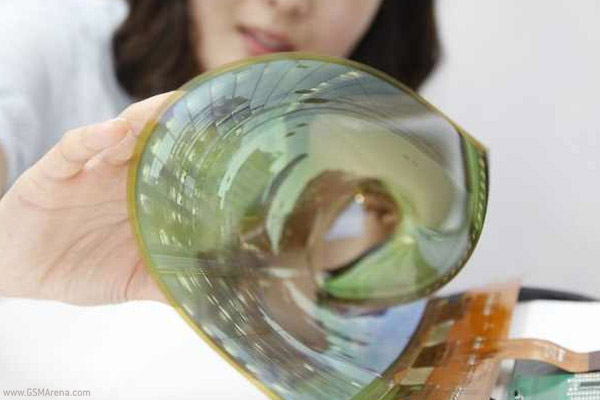 The new flexible screen tech has four phases: curved, bent, foldable and rollable. The first two are already a reality, the third one is coming soon while the last one holds promise of displays that are stored like roller blinds.

LG Display has its flexible screens too, though its focus is elsewhere – the company is experimenting with transparent displays. Those will enable augmented reality displays without the need for Google Glass style wearables.

LG already has a promotional prototype ready, however, "it will take some time" until the factories are ready for mass production. The tech is already is some products like luxury cars (for heads-up displays) and refrigerators (to let you see what's inside while showing ads too).

Anyway, there's one transparent display phone that we can think of, the Sony Ericsson Xperia Pureness. Of course, that one had a tiny, low-res, monochrome display and never drew much attention from consumers.

LG is much further ahead than that - the image above is an 18" LG display that's both transparent and bendable.

Yes I'm stupid. Are you hurt by my stupidity? My stupidity tells you the real thing. Haven't you heard about bendable iPhones? Apple call that innovation (Just like all the things they come up that's already on all phones, then call it innovative). ...