The music player on the Samsung C3300K Champ allows filtering tracks by author, album, and genre. Automatic playlists (recently added, most played etc.) are also generated and can subsequently be used as filters. If that doesn't seem enough, you can create your own custom playlists. The music player can naturally be minimized to play in the background.

The music player also has a dedicated homescreen widget that can start, stop and alternate tracks straight from the home screen. You can enable a timer to turn off the music player after some period.

The equalizer • the music player widget

Last, but certainly not least, the player is nicely touch-optimized to include fast forward and rewind. This adds up to an great music application that can fully replace your portable MP3 player.

The Samsung C3300K Champ packs a stereo FM radio that has a built-in antenna. That means it works even without headphones plugged in and with the loud stereo speakers it can easily provide entertainment for a group of people at a moment’s notice.

The FM radio application • the radio and player widgets

The radio doesn’t have RDS or music recognition service, but we can live without those things. The Champ has the option to record a radio broadcast – the quickest way to get a new song.

A cool feature is the program reminders – you can set several reminders, each for a specific station, active only on certain days. When the time comes, an alarm sounds with a handy button to start the radio and tune it to the preselected frequency. If you have several radio programs you follow, this feature is priceless.

The homescreen widget works much like the music player widget. You can start/stop the radio and change stations. It too replaces the clock on the first homescreen.

The video player is basic

The video player has a simple interface with not too many features. It can play .3GP and .MP4 videos though we only managed to get QCIF videos playing. Even QVGA proved too much.

A nice feature is the option to resume playback from the last position. Other than that, you’ll have to expect compatibility problems with many videos.

Audio output is a mixed bag

The Samsung C3300K Champ did reasonably well in our audio quality test. It achieved some excellent scores when you use it as audio source for external amplifiers (such as a car or home stereo), rivaling some of the best handsets we have seen. The stereo crosstalk reading and loudness were the only areas where it failed to impress, although it isn't too bad there either.

However once you plug in headphones, the Champ basically loses its stereo capabilities streaming virtually identical sound streams to both channels. You can also see the really high distortion levels in the chart below. 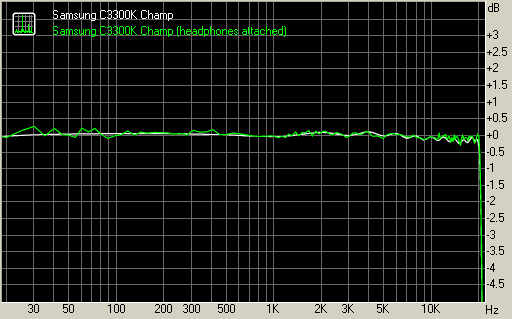