The Samsung I9210 - Celox has, again been caught in the wild sporting the Korean SK Telecom's logo on its back. The Celox is a top dog device of the Galaxy S II variety, but will probably sport LTE radio to give unmatched download speeds. 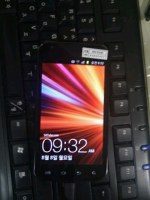 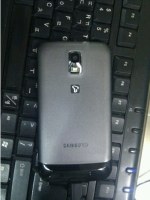 The phone does feature 4 capacitive keys under its display, which is a layout different to what we saw in the previous leak. Back then the home button was a regular tactile feedback key, but obviously the design changed along the way.

Previous rumors suggested that the Celox will also feature a 4.5" SuperAMOLED Plus of WVGA resolution and a dual-core 1.2 GHz Qualcomm APQ8060 CPU. Last but not least, it'll run the TouchWiz UI 4.0 on top of Android 2.3 Gingerbread and have an 8 MP snapper on the back to seal the high-end deal.

He did say something about what you said...

Off topic. I think you thought you were in the other news item about the chinese phone?? Oh, dont bother reposting there, your comment has zero content