Samsung Champ on sale in Germany, Monte Slider in Russia

Two entry-level Samsung phones are hitting the stores, in some regions at least. The affordable touch operated Samsung C3300 Champ and the Samsung E2550 Monte Slider are going on sale in Germany and Russia respectively.

The Samsung C3300 Champ tries to out-Corby the Corby - small touchscreen (2.4" QVGA in this case), TouchWiz Lite, basic camera (1.3MP vs. the 2MP on the Corby) and hopefully decent multimedia features thanks to the 3.5mm audio jack and integrated stereo speakers with 3D sound effects. 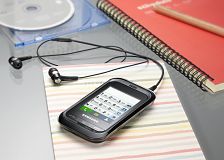 The other entry-level Samsung that is going on sale is the Samsung E2550 Monte Slider. It has recognizable Monte styling, but unlike its namesake, the Samsung S5620 Monte, it's not a touch phone.

It features Samsung's DNSe technology for a better listening experience, FM radio with RDS and broadcast recording and a microSD card slot to expand the internal memory. The Samsung E2550 Monte Slider also features social networking functions with live updates. The Monte Slider will be available on the Russian market for about 3,990 rubles (104 euro or 129 US dollars).