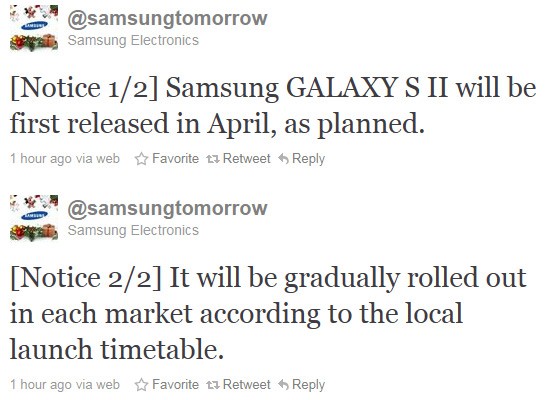 Unfortunately, there's no concrete information about which markets will be getting the Galaxy S II first.

The company also said that the device will be "gradually rolled out in each market according to the local launch timetable". It sounds laconic enough. It may mean that the Galaxy S II will hit everywhere, just gradually, not in huge numbers. Or that key European markets will be getting it first. We can only guess.

We're yet to see what's what with the Galaxy S II. As you know it already came in for a preview and we're currently working with it.

New phones are always exciting, but would you care to share with us how you use your current phone? Take our 2-minute survey HERE!

i want to purchse ths phn. shld i? plz tell me

BTW, N8 looks like a cigarette case..and the aluminum shell doesn't help either.. ;P I have always wondered whats going on in Nokia.. why they take so long to put out a 1ghz flagship phone? Since start of 2011, almost every phone is 1 ghz atlea...