Samsung drops all Symbian support by the end of December

And when we say all, we really mean it. By the end of December Samsung will close its Symbian forums, developer's site and will remove all Symbian-related documentation from its servers. Ouch!

Unlike Sony Ericsson, which just has no future plans on developing Symbian handsets, Samsung acts far more aggressively. It will close its Symbian dedicated forums and websites and will delete all Symbian-related data. It's like Samsung want to erase the Symbian print from its history.

The Symbian termination will start on 29 October with the close of its developer section on the Samsung Mobile Innovator website. Then on 30 and 31 December all forums and data will go down. 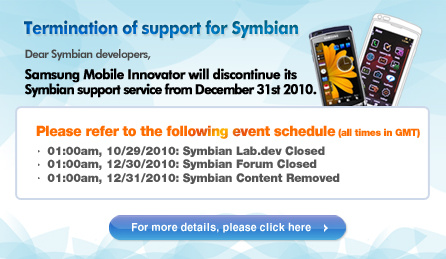 Developers should hurry up and submit any Symbian apps they might have to the Samsung Apps store.

Ok, that's starting to freak us out. Sony Ericsson and Samsung are clearly not sending the right message with their actions. You can't just turn your back on a smartphone platform you've used on your high-end devices. Should we start worrying they might as well ditch Android or even WP7 in a year or two?

yes brother they should give us opportunity to upgrade symbian to bada.. i do not like symbian this is full of errors.. i hate symbian iìve bough omnia hd ago and now i don't like it any more for these stupid errors and there are very very les...

Samsungs great at cutting off eople who fork out hard earned cash for their products! I bought a Jet s8003 - yeah idiot!!! NO SUPPORT ANDS NO APPS AS PROMISED! They just think its ok to take $$$ and run. NEVER BUY SAMSUNG YOU CAN'T TRUST THEM...

only one reason, Symbian is simply not in par with other current OS. BTW, Nokia owns Symbian.