Samsung's upcoming Galaxy S8 will once again use chipsets from two different makers. So depending on where you order from, you might get an S8 with Qualcomm's Snapdragon 835 or one powered by Samsung's own Exynos 8895. Up until today not much was known about the latter, other than it being on track to be used in the Galaxy S8. One outlandish rumor claimed its CPU would be clocked at 3 GHz, while another talked about the Exynos 8895 using ARM's Mali-G71 GPU design, the latest and greatest from the British semiconductor company.

Now though we get some more details about the Exynos 8895, courtesy of the image you can see below, which purportedly depicts the rough spec sheet for the SoC (and compares it to the Snapdragon 835). 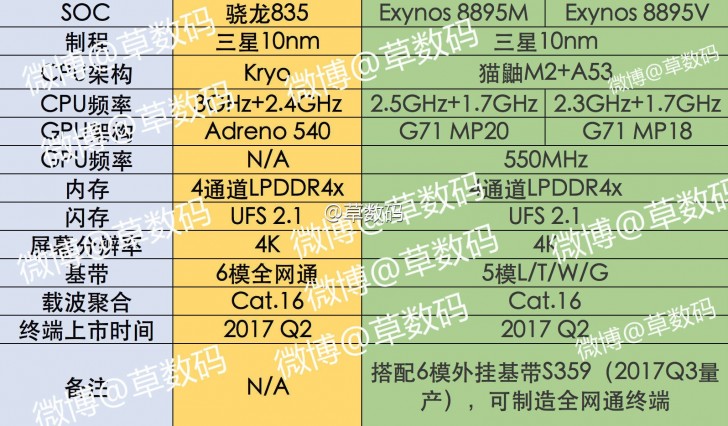 So, the Exynos 8895 is supposedly coming in two versions, which will be identical in all respects except for two: first, the 8895M will have a quad-core Samsung-designed M2 performance CPU cluster clocked 200 MHz higher than the 8895V, and second, the G71 GPU in the former will get two extra cores compared to the latter.

Samsung's next SoC will be made using a 10nm process, the exact same one as the SD835 (since Samsung's fab is producing them both). The CPU will be an octa-core part with four M2 performance cores designed by Samsung, and four battery-friendly ARM Cortex-A53 cores. The former will be clocked at up to 2.5 GHz in the M version of the chip, and 2.3 GHz in the V model. The A53 cores will go to 1.7 GHz in both.

The Mali-G71 GPU employed by both iterations of the 8895 will have 20 cores in the high-end M model and 18 in the V variant. In both cases, the GPU will be clocked at 550 MHz. The Exynos 8895 supports LPDDR4 RAM, UFS 2.1 storage, 4K screens, and Cat.16 LTE. It's slated for arriving in shipping products in the second quarter of 2017, so from April to June. This time frame fits with what we've heard recently about Samsung only announcing the S8 line in April.

Qualcomm's Snapdragon 835 will be released at roughly the same time, which again makes sense considering Samsung is producing it too. And if the Korean company has yield issues when using its new 10nm process as rumored, then it stands to reason that both the SD835 and the Exynos 8895 would be affected.

This leak says Qualcomm will once again use custom-designed Kryo cores for the SD835, only this time the higher-performance cluster will be clocked at up to 3 GHz, while the other cores will go only to 2.4 GHz. The Adreno 540 GPU will be in too, along with support for 4K screens, Cat.16 LTE, LPDDR4 RAM, and UFS 2.1 storage.