Samsung G925F specs from AnTuTu may detail the Galaxy S6

The Galaxy S5 fell below Samsung expectations and now all eyes are on its replacement – the Galaxy S6. We've already heard some murmurs about the specs, but now there's something more solid, an AnTuTu screenshot.

The screenshot confirms the Samsung-made Exynos 7420 chipset. It has eight cores in total, half Cortex-A57, half A53, all of them 64-bit capable. They run Android 5.0 Lollipop (which is already on the Galaxy S5) and have 3GB of RAM to stretch their feet.

The GPU will be Mali-T760, same as the one in the Galaxy Note 4 with Exynos 5433. There will most likely be a Snapdragon version of the phone, though talk of the 810 getting delayed might mean there will be only Exynos at launch. By the way, Snapdragon 810 has the same CPU cores as the Samsung chipset, but a different GPU. 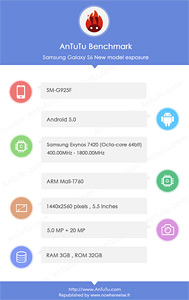 The main camera has a 20MP sensor according to AnTuTu. Earlier rumors said it will be a Sony sensor and that the resolution wasn’t decided yet – 16MP (the IMX240 sensor from the Note 4) or 20MP. On the front is a 5MP shooter, a tentative step in line with the selfie craze.

There are many things the benchmark can't detect – Samsung is rumored to be starting from scratch with the Galaxy S6 design (even naming the endeavor "Project Zero"). This could include an Edge variant and anything else Samsung's labs can cook up. We'll probably find out at the MWC next year.

Thanks, Steve, for sending this in!

samsung only win the specification on paper. but in real performance, it still wasn't perfomed as those specification itself. others phone was lag even iphone.but samsung worser at current state.